On July 7, 2016, people in Dallas protested the deaths of Alton Sterling and Philando Castile. Hours later, a sniper would target and kill police officers guarding the peaceful protest.
LAURA BUCKMAN—AFP/Getty Images
Ideas
By Benjamin Crump
Benjamin L. Crump is the attorney for the families of Trayvon Martin, Michael Brown, and Corey Jones and is a former President of the National Bar Association

How many times must a black man be unjustly killed at the hands of the people that are supposed to protect and serve? By now most have the watched the final seconds of Alton Sterling’s life, as he was pinned down by two police officers before being shot and killed. Sterling was shot while lying on the ground with one officer straddling him and another officer held him down at the neck. You hear an officer yell, “If you f-cking move, I swear to God,” a statement followed by gunshots fired at point blank range. Sterling had been shot multiple times in his chest. A man, who prior to the arrest had been selling CDs and DVDs outside of a convenience store with the owner’s permission, is now dead for no good reason. Sterling was a father, son, brother and friend. He could have been your father, son, brother or friend. Next time it could be your father, son, brother or friend.

This time the killing happened at the hands of Baton Rouge Police Officers. The U.S. Department of Justice will once again lead a civil rights investigation, and it will not be enough. The officers must be charged and held accountable for their actions. It is not enough that Blane Salamoni and Howie Lake II are on paid administrative leave for killing Alton Sterling. They must be terminated, indicted and convicted. This way of policing has to change. It never will, if officers are not held accountable. The repeated murders, investigations and lack of indictments send a message to bad police officers that they are above the law.

Less than forty-eight hours after the unnecessary killing of Sterling, Philando Castile was killed by a police officer in Falcon Heights, Minnesota. He was pulled over for allegedly having a busted taillight—a routine traffic stop. During the stop, Castile informed the officer that he had a permit to carry a concealed weapon and further notified the officer that he was in fact carrying a weapon, well within his legal rights. The officer asked for Castile’s license and registration. Castile had no way to know that when he attempted to comply with the officer’s commands he would be shot and killed. Shot and killed with his fiancé and a four-year-old girl in the same car that the officer intentionally and recklessly fired four bullets into. Castile was killed for being black, legally carrying a gun and being pulled over by the wrong police officers. The officer involved in this killing must be indicted, charged and convicted. The way of policing in America has to change.

While officers are given no reason to change, our communities are losing faith day by day in the justice system, if there is any faith at all left at this point. Black men cannot and will not continue to be targets of policing gone wrong. Communities are rightfully outraged; they want answers; they want accountability; and they want justice. Communities deserve justice.

But what happened yesterday evening in Dallas is not justice. Four snipers shot eleven police officers, killing five. The attack took place at the end of demonstrations protesting the killings of Sterling and Castile. Three of the four suspects are now in police custody. We do not advocate violence against law enforcement, and we condemn the violent acts that occurred in Dallas, because it is exactly what we have always feared could happen if our society continues to fall short of the American idea of justice for all.

We called for change in Illinois, Missouri, Maryland, New York, Ohio, South Carolina, Texas and other states. We asked for resignations. We requested indictments. We demanded justice. How long are our communities expected to wait for the justice system to come around and do right by them? How long before the system realizes that Black Lives Matter—just as Blue Lives Matter? Change needs to happen, and it needs to happen now. We cannot have another Sterling, Castile or Dallas Police Department. 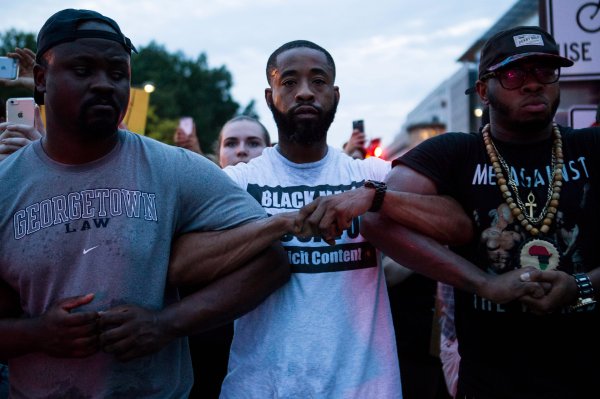 Letters Between a Black Father and His Son
Next Up: Editor's Pick