Sister Remembers Dallas Officer Killed by Sniper: 'He Took Care of Me'

Last week, Officer Patrick Zamarripa was researching Disney Cruises to plan a family vacation for his girlfriend, his 8-year-old stepson, and his 2-year-old daughter. But dreams of Disney were cut short Thursday night, when Zamarripa and four other cops were shot and killed by a sniper targeting officers at a peaceful Black Lives Matter protest.

Instead of making plans for the future, Zamarripa’s family is now mourning the 32-year-old Navy veteran, who had always dreamed of becoming a police officer so he could help keep people safe. His protectiveness even extended to his older sister Laura Zamarripa, 34, who remembers him having her back even when they were kids.

“He was my bug killer,” she recalled Friday as the family gathered to grieve together in Texas. “Even thought I was the big sister and I was strong and stuff, I could never kill bugs. He would get up in the middle of the night.”

Later, Zamarripa served in Iraq and Afghanistan, and even as he was facing dangerous situations in the military, he always checked up on his sister, who was also enlisted. “I was on a ship, and my brother was stationed on an oil rig, and I would get letters from him weeks later delivered via helicopter,” she remembered. “He was keeping up with the status of my ship and asking questions, even though he was my little brother.”

Two years ago, Officer Zamarripa’s entire world changed with the birth of his daughter, Lyncoln. She made him a “happy spirit,” Laura said. “He just had a constant smile on his face after he became a father.”

He was a “super proactive” dad who took his baby daughter to the gym with him and was an expert diaper changer, she added.

“I think he finally found someone to play with,” Laura added of the birth of her niece. “He filled some part of his heart that was obviously empty.”

The world Zamarripa had hoped to build for his daughter was “nothing like last night,” Laura said the morning after the shooting. The only part of his job he disliked was witnessing violence against children. “He would say ‘this is the only thing I don’t like about my job, is that I have to see children who are helpless get mistreated,'” she said.

At the end of each year Zamarripa and his two siblings always discussed their wish for the year ahead, Laura recalled: “We have this thing between the three of us, and we’d say ‘what do you want for Christmas?'” she said. “And we’d always say ‘world peace and happiness.” 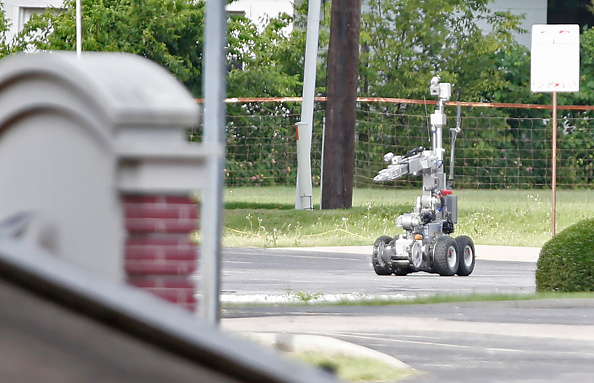 When Can Police Use a 'Bomb Robot' to Kill a Suspect?
Next Up: Editor's Pick