These Are the Victims of the Dallas Police Shooting

By Charlotte Alter and Tara John

Five police officers were killed and seven others were wounded after a sniper opened fire from above in downtown Dallas Thursday night.

A sniper shot officers on duty at a peaceful protest following the shooting deaths of Alton Sterling and Philando Castile by Louisiana and Minnesota police officers earlier this week. The suspect was shot and killed after a standoff with police.

Brent Thompson, 43, joined DART Police Department in 2009. He is the first to be killed in the line of duty since the agency was established in 1989. He had just married a fellow officer.

Before DART he worked for military contractor DynCorp International, mentoring and training teams in Afghanistan and Iraq. He also described himself on Linkedin as someone motivated by a “team” atmosphere, writing: “I enjoy working on challenging tasks and problem solving with my peers. I am constantly looking for different ways to serve the department, this helps to keep my work from becoming sedentary and boring.”

Dallas Police Officer Patrick Zamarripa, 32, was a Navy veteran who had imagined being a police officer since childhood, his sister said. He was thrilled with the birth of his daughter two years ago. “He just had a constant smile on his face after he became a father,” his sister Laura Zamarripa said.

His Twitter photo shows him holding a small child, and on Father’s Day he tweeted:

Dallas Police officer Michael Krol, an eight-year veteran of the department, had a lifelong dream of being a police officer, according to local media reports citing a family member. He had previously served as a Wayne County sheriff’s deputy and worked in county jails from 2003 to 2007, Sheriff Benny Napoleon said Friday.

Dallas Police officer Lorne Ahrens was a former semi-pro football player who stood tall at 6′ 5″. He is survived by his wife, two children and a step-child, according to a Washington Post report.

Dallas Police Sgt. Michael Smith, 55, was a former Army Ranger and the father of two young children, according to a USA Today report.

DART released the names of the other three of its officers injured in the shootings: Omar Cannon, 44, Misty McBride, 32, and Jesus Retana, 39

“As you can imagine, our hearts are broken,” the agency said in a statement. “This is something that touches every part of our organization. We have received countless expressions of support and sympathy from around the world through the evening. We are grateful for every message. Thank you.”

“We are grateful to report the three other Dart police officers shot during the protest are expected to recover from their injuries. No other Dart employees working in Downtown during the protest or shooting were injured. We also extend our sympathies to our colleagues at the Dallas Police Department in the loss of their five officers.” 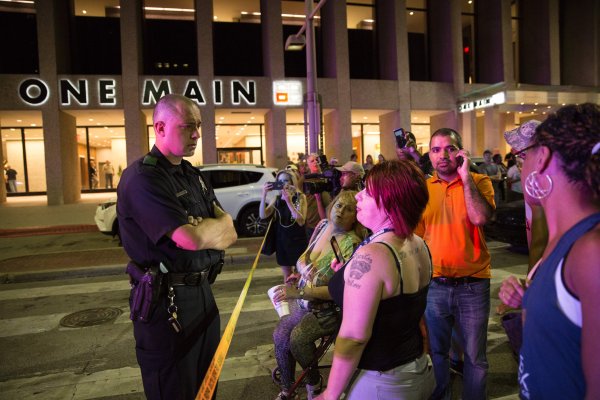 Eyewitnesses Recall Horror of Dallas Shootings
Next Up: Editor's Pick