President Obama on Sterling and Castile Shootings: 'We Are Better Than This'

Speaking from Warsaw early Friday morning, President Obama said all Americans should be troubled by the shooting deaths of Alton Sterling and Philando Castile who were both killed by police this week.

“All of us as Americans should be troubled by the shootings,” the President said, moments after stepping off of an eight-hour flight to Poland from Washington, D.C. “We have seen tragedies like this too many times.”

Obama acknowledged the inquiry the U.S. Justice Department in Louisiana opened into Sterling’s shooting and the call to action by Minnesota Governor Mark Dayton, who said that race likely played a factor in Castile’s shooting, during his remarks. The President had addressed the shooting in a lengthy Facebook post on Wednesday, but went into greater detail during his spoken address.

The President laid out a list of statistics that suggest black and Latino Americans are disproportionately affected by the criminal-justice system than their white counterparts — even when situations are similar but for the color of their skin. Blacks, Obama said, are 30 % more likely than whites to be pulled over, and blacks and Latinos are three times more likely to be searched. They are also arrested at higher rates than whites, have a higher chance of being involved in a deadly encounter with law enforcement, and face longer sentences for comparable crimes.

“These are facts,” Obama said. “When incidents like this occur, there’s a big chunk of our fellow citizenry that feels as if because of the color of their skin they are not being treated the same. That hurts and that should trouble all of us.”

This isn’t the first time the President has addressed a deadly incident between law-enforcement officials and black Americans. In the wake of the shooting of Michael Brown in Missouri and the chokehold death of Eric Garner in New York, the President launched the Task Force on 21st Century Policing, which produced a set of recommendations meant to help prevent police killings and improve police-community relations.

The President also took time to acknowledge the work of law-enforcement officials around the country, who he said often have to make split-second decisions in the line of duty. They too, Obama said, deserve to go home to their families. But the President also addressed a critique he has faced in the wake of such incidents: that because he takes special time out to address cases where police kill civilians rather, he is neglecting police fatalities and striking an anti-law enforcement stance.

“To all of law enforcement I want to be very clear, we know you have a tough job,” Obama added, saying Americans also “mourn those in uniform who are protecting us who lose their lives.”

“When people say black lives matter, that doesn’t mean that blue lives don’t matter,” the President continued. “All lives matter, but the data shows that black folks are more vulnerable to these kinds of incidents.”

“We should care about that. We can’t dismiss it,” Obama said. 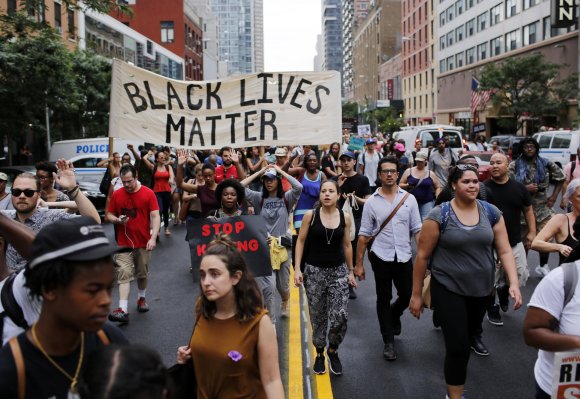