Meet the Tyrant Donald Trump Loves the Most

A couple kisses in front of graffiti depicting Russian President Vladimir Putin, left, and Republican presidential candidate Donald Trump, on the walls of a bar in the old town in Vilnius, Lithuania, on May 14, 2016.
Mindaugas Kulbis—AP
Ideas
By Elise Jordan
Jordan is a TIME columnist, an NBC News/MSNBC political analyst and a co-host of the Words Matter podcast.

An Iraqi friend once told me a chilling story about why one of Saddam Hussein’s Baghdad palaces had a room stocked with new stereos. His son Uday would spot a woman on the street, have his guards kidnap her, and rape and torture her. If she pleased Uday, the story went, she would leave with a stereo. If not, well, a dead woman doesn’t need a stereo.

Uday reputedly learned the trade of terror from Saddam, who took him as a child to tour the prisons where his regime tortured and executed hundred of thousands of Iraqis.

Though Donald Trump has praised Hussein before, the tactical stupidity of his latest comment really made it pop. Hillary Clinton had just been given a literal get-out-of-jail card from the FBI, but Trump picked the moment to heap praise on a dictator who gassed and tortured by the millions.

But it is Russian President Vladimir Putin that Trump most admires—and judging from the presumptive Republican nominee’s actions, he would attempt to rule like him.

The blustering brand licensor loves to brag that Putin once called him a “genius,” claiming that he “got to know him well” as “stablemates” during separately pre-taped interviews airing on the same episode of CBS’s 60 Minutes. (Not that it would matter to Trump, who is allergic to telling the truth, but Putin’s comments got lost in translation—linguists said Putin called him “colorful” and “talented,” never a genius. Putin later clarified he only called him “colorful.”)

Putin—the world’s ultimate vulture investor—senses that Trump’s rise portends weakness for America. No wonder Putin is openly excited by the prospect of facing off against an ignorant reality star whom he could easily dominate in the international pecking order. While Trump didn’t even know about Britain’s pending vote on the Euro, Putin had an active pro-Brexit propaganda campaign.

For now, Trump on the campaign trail is Putin with training wheels.

Trump’s campaign has been defined by his ongoing attacks on strong women, echoing Putin’s pathetic attempts at machismo: from Putin baring his chest on horseback in Siberia or freeing a caged leopard, to a cracking down on LGBT rights and the imprisonment of the feminist Pussy Riot activists. All that was supposed to save a diminished and broke Russia. When that wasn’t enough, Putin moved on to territorial aggression, seizing Crimea.

The quest for absolute power makes any support is good support in Trump and Putin’s playbook. Trump refused to disavow David Duke, the leader of the Ku Klux Klan, lying through his teeth that he didn’t know who he was, and panders to white supremacists by refusing to disavow a widely panned anti-Semitic tweet. Though Putin criticizes Ukraine as a hotbed of neo-Nazis, he welcomed a gathering of white European extremists last fall to extend his influence within Europe. Eight protestors carrying signs with statements such as “We don’t want foreign Nazis in St. Petersburg, we have more than enough of them here” were arrested.

But Trump and Putin’s greatest enemy is the truth.

Putin is spending 1.3 billion this year on propaganda. Putin enforces draconian controls against journalists and political opposition, literally killing his enemies, like the former chief of RT who ended up bludgeoned in a Washington, DC hotel room. (RT reported he had suffered a heart attack.) Legislation has stifled critics of his rule, putting opponents in prison, where they are routinely tortured. According to champion chess master Gary Kasparov, it was a slow but steady crackdown: “Eventually, when you look at the results of Putin’s rule today, almost everything that aims at criticizing the government is a criminal offense.” Putin even installed a factory of trolls aimed at countering any anti-Russia speech abroad.

When Trump’s power is challenged, he lies and counter-attacks. Faced with a lawsuit about his fraudulent Trump University, Trump impugned the Indiana-born judge trying the case as fundamentally biased because of his Mexican ethnicity. Trump seeks to change the legal system to fit what he himself, not the Constitution, deems as fair, including curbing the First Amendment’s protections for journalists.

Ironically, a Trump presidency might actually make the Obama administration—which has prosecuted more leakers and whistleblowers than all previous administrations combined—look like one of the more transparent in history. Trump would stop American military officials from conducting interviews and make government employees sign non-disclosure agreements preventing them from commenting on his administration. (Saddam simply made it law that anyone who criticized him would have their tongues cut out.)

Trump is obsessed with being on camera and what’s being said about him on camera, and for now it’s been a winning primary strategy. Trump has been irresistible to news cameras precisely because he’s a narcissist with no impulse control. The theory that Trump will somehow start acting “presidential” once in office ignores the fact that presidential behavior wouldn’t get him the television air he craves. He might try it, but it’s unlikely he’d take to it.

In terms of foreign policy, Trump’s media addiction might prove truly catastrophic: he will always have to keep doing something to keep the cameras on him. Though Trump may genuinely be a non-interventionist, his pride would supersede this ideology when he meets an inevitable challenge on the world stage.

Imagine this scary scenario: what happens when Trump can’t get Mexico to pay for the wall?

Since Hillary already took us to the shores of Tripoli, Donald might try to take it all the way to halls of Montezuma. It’s not too far-fetched to imagine Trump going full Putin and starting a war with Mexico, like Putin’s Crimea grab, if they don’t build the wall. Maybe he’d snatch oceanfront property to pay for the wall. Vacation in Trumpistan, anyone, and get your concierge to book a first-class stopover to view construction.

In 1988, when Ronald Reagan met with almost 100 dissidents, at the U.S. Ambassador’s residence in Moscow, a Russian official dismissed the assembled crowd, saying they were “not the best” people. Today, that has a Trumpian ring to it.

I’m most concerned with, as the late dissident and Holocaust survivor Elie Wiesel put it, the perils of indifference to Trump’s sufficient warnings of what he stands for—including his love for tyrants.

“To be indifferent to that suffering is what makes the human being inhuman,” Wiesel famously said at the White House in 1999. “Indifference, after all, is more dangerous than anger and hatred.”

When Trump shows indifference to principles of human dignity, acquiescence by his new Republican peers defiles a great political party, which becomes complicit. 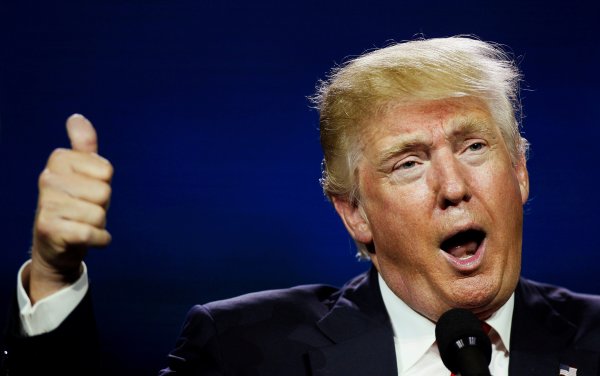 This Is What Abraham Lincoln Would Tell Donald Trump
Next Up: Editor's Pick