What to Know About the History of the Fed's Beige Book

On Wednesday, as it does every six weeks, the U.S. Federal Reserve will release what’s called the Beige Book, so-called for the color of its cover.

The full official title of the report is “Summary of Commentary on Current Economic Conditions by Federal Reserve District.” The book, an anecdotal overview of what’s going on with the economy in each of the 12 federal reserve districts around the U.S., is not necessarily the best economic predictor, but its release has become a newsworthy occasion as it offers a glimpse of what the Fed is looking at and might discuss.

But it wasn’t always known as the Beige Book, and it wasn’t always public. And in fact, a quick look at its history reveals that it is often used today in a way that’s pretty much the opposite of what was intended.

First introduced in 1970 as a more efficient substitute for the oral reports from the 12 district bank presidents delivered during meetings, it was originally known as the red book, again for its cover. The very first edition was prepared for the May 26, 1970 Fed meeting. At the time it was a confidential document, not available to the press or public, and was only delivered to the Board and select staff at the district banks. The first Red Book opened by describing its sources and purpose: “This initial report of economic conditions in the 12 Federal Reserve Districts is based on information gathered from directors of the Reserve Banks, conversations with local bankers, businessmen and economists, regular monthly surveys of manufacturing and trade industries conducted by some of the Reserve Banks, and selected statistical measures of regional economic activity.”

The book wasn’t the only confidential report distributed to committee members, there was also the Greenbook, which provided in-depth analysis of the current economic and financial prognosis, and the Bluebook, which gave perspective on policy alternatives. (The two combined in 2010 to form the Tealbook.)

In February of 1983, Walter Fauntroy, House of Representatives delegate from Washington D.C. and chairman of the House Subcommittee on Domestic Monetary Policy, was interested in increased transparency from the Fed. He requested the Red Book be released to the public when the Fed’s policy recommendation was. Instead the Fed chose to remove details about specific companies or individuals from the document and make it public about two weeks before the meetings of the Federal Open Market Committee, a group that meets eight times a year and determines monetary policy like interest rates. (The next decision on interest rates is expected on July 27.) They also changed the cover color from red to beige, or tan as it was also called in the early years.

The first Beige book was prepared in June 1983 in preparation for the mid-July meeting. This two-week gap between its release and the meeting is intended to underscore that the information the Beige Book contains is not meant to be headline news — after all, it’s out of date by the time the Fed actually meets — and that this report is just one of the numerous sources which inform the Fed’s decisions. Beige is, likewise, the color of something meant to be bland and routine.

For a while, this messaging seemed to work. The newly-beige Book wasn’t immediately subject to high levels of media attention.

It took about five years for the media to pay attention to the book and begin regularly reporting on its release. In 1986 the Dow Jones News Service wrote a brief article on the report’s findings, quoting from the “Tan book” that there was “Moderate growth is being reported by most Federal Reserve districts” and noting there was little change from the previous report. By 1988 newspapers began to publish articles about the survey’s findings, increasingly regular dispatches on the Fed’s summaries of how different sectors of the economy had fared across the U.S.—something they still do today. 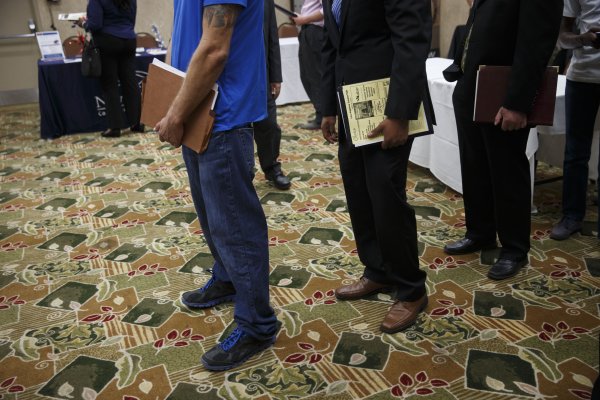 A Majority of Americans Think the U.S. Economy Is Rigged
Next Up: Editor's Pick