The Bangladeshi capital Dhaka came under attack by suspected terrorists for the second time in a week on Thursday, as a bombing by suspected Islamic militants killed three people and injured several others during a religious ceremony attended by thousands.

The victims include two police officers and a woman, while one of the attackers was also killed in the ensuing firefight, the Dhaka Tribune newspaper reports. Two other suspects, one of them wounded, have reportedly been captured as security forces continue to hunt for the rest.

Local sources said officers frisking people at the entrance to the religious site were attacked Thursday morning by a group of six or seven men. A huge congregation of some 300,000 worshippers, who had gathered less than a mile away to observe Eid-al-Fitr — the Muslim holiday marking the end of the holy month of Ramadan — were trapped for hours as police engaged in a firefight with the attackers, according to the Daily Star newspaper.

Police cordoned off a section of the Kishoreganj district north of the capital, where the attack took place, and continued to comb the area for militants potentially still at large, the Associated Press reported.

“We are still checking for other miscreants but after this incident, prayers were held peacefully and we have asked everyone to go home,” Zillur Rahman, a district council administrator, told Reuters.

This is the second time terrorists have struck Bangladesh in less than a week. On July 1, gunmen attacked a popular restaurant in an upscale Dhaka neighborhood last Friday, where 22 people — including 18 foreigners and two policemen — were killed by gunmen. The attack was claimed by the Islamic State (ISIS) militant group. 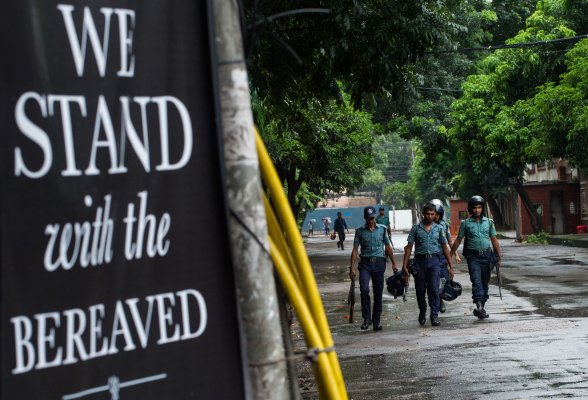 Bangladesh Security Forces May Have Killed Hostage
Next Up: Editor's Pick