Here's Why the Latest 'Never Trump' Plan Is Doomed

The Republican daydream of replacing Donald Trump at the top of the ticket returned Wednesday, but it’s likely to end in yet another disappointment.

A report in the Wall Street Journal highlighting an internal Trump whip count of GOP convention delegates has reignited the hopes of the Never Trump crowd.

The count from Trump supporter and Republican National Committee member Randy Evans, confirmed by TIME, shows about 890 delegates firmly backing Trump and 680 opposing him. Both are short of the 1,237 necessary to win the nomination, with roughly 900 who haven’t firmly committed.

But conversations with delegates, RNC members and party and campaign officials made clear that the odds of such a coup are essentially nil.

Here are six major reasons why the effort would fail.

It’s not enough just to “dump Trump.” The delegates would also have to pick someone else, but there is no clear heir apparent. Texas Senator Ted Cruz’s aides have kept a close watch on the effort, and it is being led by many of his staunchest supporters. But a senior Cruz aide said, “I can’t envision a scenario” where he would replace Trump atop the ticket, saying, “there’s no way to come out of that and win.” And Cruz is polarizing in his own right, as failed efforts to unite the party around him as a Trump alternative this spring demonstrated. To many moderate Republicans, Cruz is as bad as, or worse than, Trump, owing to his hard-line social conservative positions and hawkish foreign policy. Save for Cruz, Florida Senator Marco Rubio and Kentucky Senator Rand Paul’s re-election campaigns, the 2016 contenders have no real political operations. Respected party leaders like Mitt Romney have repeatedly said they won’t jump in unless they see a path to victory in November, and there’s little chance of that when a large fraction of the GOP base will be upset their preferred candidate was undemocratically dumped.

Getting rid of Trump would have its own consequences.

Riding on a wave of anti-establishment anger, Trump still rails against the efforts by his rivals to “rig” the system against him by outworking him in state convention delegate selections. Cutting Trump loose would only exacerbate that problem and likely irreparably split the GOP. As New Hampshire committeeman Steve Duprey explained Wednesday: “I was neutral in our New Hampshire primary, but I don’t think it is out of line for me to say that Donald Trump was not my choice. However, he ran his race according to the rules and followed those rules. I don’t think I should substitute my views for those of all the voters who showed up and participated in our primary.”

The Never Trump faction gave up too early.

Cruz quit the race on May 3 after losing the Indiana primary, and largely ceased his campaign’s efforts to secure delegate slots and key convention committee positions for those opposed to Trump. Had that not stopped, the dump-Trump effort may have been in a position to succeed, but by giving up, they allowed the unpopular presumptive nominee to make up his deficits.

There’s little organization behind the plan.

Even if the will remained to try to unseat Trump, there’s no defined effort to do so. For the past several weeks a loosely aligned network of anti-Trump groups have held conference calls to coordinate strategy and message for unbinding convention delegates in hopes of getting rid of him. No fewer than eight such groups exist with various levels of funding and sophistication. Kendal Unruh, the Colorado delegate who has served as the face of the conglomeration of efforts, told TIME, “I can’t micromanage all the [Facebook] groups. My proverbial answer to those who contact me all day long about so and so doing so and so to so and so is, deal with it. Everyone has a role to play and those who know our plan can be the outreach needed to keep everyone on track. We simply can’t be distracted by it.” The groups have been reaching out to individual delegates and rules committee members, but turning an organic movement into a coup requires more. The groups have not yet finalized a strategy and will face significant obstacles on the convention floor because they are not a sanctioned campaign.

The delegates are unlikely to be unbound.

Any hope to deny Trump the nomination starts at the convention rules committee, where the 112 members — one man and woman from each delegation — will formulate a draft of the rules for the convention and the GOP for the next four years. The anti-Trump contingent wants to undo the strict “binding” rules inserted in 2012, which require delegates to vote in accordance with the results of primaries and caucuses, rather than being “faithless” — or as the unbinding crowd prefers, “voting their conscience.” A majority of those 112 would be required to send such an amendment to the full convention floor, where the entire body of 2,472 would have to pass it by simple majority. Alternatively, if 25% of the committee, or 28 delegates, support it, they can send the amendment as a “minority report” to the full convention for an up-or-down vote. According to members of the committee, there is no majority support for unbinding the delegates, though the anti-Trump forces are on the cusp of clearing the minority-report threshold. Even so, they still lack the votes on the full convention floor, where they are still a vocal but clear minority.

Even if the delegates were unbound, Trump still has the votes.

Without a clear alternative, even if by some miracle the delegates were unbound, Trump would win a large plurality, if not an outright majority, on the first ballot, as the rest of the vote splits every which way. He’d still need a majority to win (assuming that rule doesn’t change too), but he’d be best positioned to do so. 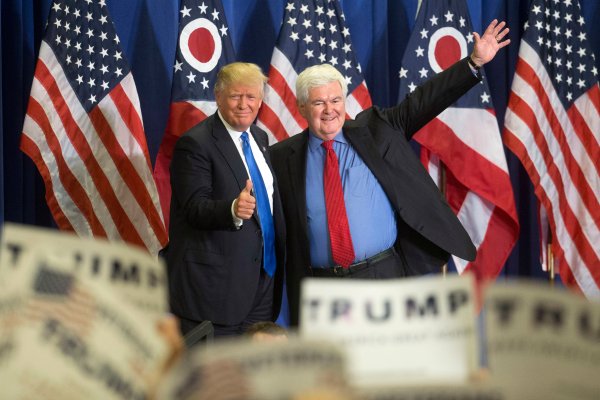 Donald Trump: Newt Gingrich Will Be 'Involved With Our Government'
Next Up: Editor's Pick