Donald Trump pumps his fists during a rally in Raleigh, N.C., on July 5, 2016.
Gerry Broome—AP
By Zeke J Miller and Alex Altman

The sum, raised between the campaign and the larger Trump Victory effort with the Republican National Committee, is more than 16 times what he raised in May—the month in which he secured the nomination.

The sum, while a drastic improvement from his meager haul the month prior, pales in comparison to what then-presumptive Republican nominee Mitt Romney and the RNC brought in four years ago. The Romney Victory effort raised $106.1 million in June 2012.

While initially boasting he was self-funding his campaign, Trump has since shifted to a more traditional model of soliciting large dollar checks at campaign fundraisers and small-dollar donations online. Particularly since the departure of former campaign manager Corey Lewandowski, the campaign has stepped up its fundraising efforts, with Trump more personally involved in the solicitations and the digital effort unleashed to rake in money from Trump supporters.

In a statement, Trump’s campaign said $26 million went to the campaign, with the more than $25 million balance going to the RNC and other Republican groups. (The latter figure includes some money raised at his inaugural fundraisers at the end of May.) The campaign claims more than 400,000 supporters, with 94% donating under the $200 threshold required for individual disclosure.

Trump loaned his campaign at least $46 million through the end of May, according to Federal Election Commission filings. On June 23, his campaign released a statement that Trump has terminated the loan “in excess of $50 million dollars.” The Trump campaign said the candidate donated another $3.8 million to his campaign in June, bringing his total to $55 million.

Trump has yet to run a general election ad, and is leaving the work of building a ground effort to the RNC, which is the largest beneficiary of the money jointly raised through the victory effort. Hillary Clinton, meanwhile, has run tens-of-millions of dollars in television spots in battleground states and has hundreds of field staffers on the ground.

“We just started our fundraising efforts in the last week of May and we are extremely pleased with the broad-based support in the last five weeks for the Trump Campaign and Trump Victory,” Steven Mnuchin, Trump’s finance chairman, in a statement. 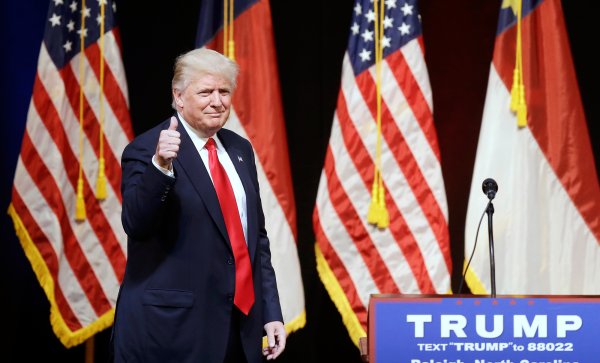