Baton Rouge Police Chief Carl Dabadie Jr. on Wednesday said he would not resign after the fatal shooting of Alton Sterling and added that he’s demanding answers to determine what led a pair of police officers to shoot the Louisiana father.

The police chief, who has come under fire and is facing calls for his resignation, called Sterling’s death a “horrible tragedy” and offered his condolences to Sterling’s family. He said those who are asking for him to step down from his post were “acting off emotion.”

“I’m not retiring. I’m not resigning,” he said at a news conference. “I don’t think it’s fair for people to act out of emotion. We have done a lot of good in this community. We’re working diligently to bring the truth out.”

Dabadie said the department is seeking to gather information from the officers’ body cameras as the U.S. Justice Department also investigates the shooting death. “Like you, there is a lot that we do not understand,” he said. “And at this point, like you, I am demanding answers. Like you, all my prayers are with this community and especially the community and loved ones of Mr. Sterling.”

“As a community, when difficult things happen, it’s important to have an honest conversation about it, what we know to be true and how to ensure that justice and accountability are held at the highest levels,” he added. “No stone will be left unturned.”

Authorities identified the two police officers involved in Sterling’s shooting as Blane Salamoni and Howie Lake. Salamoni has been with the Baton Rouge Police Department for four years, while Lake has served for three years, authorities said. Both work for the Uniform Patrol Division and have been placed on paid administrative leave.

The officers were captured on video pinning Sterling, 37, down in the parking lot of a convenience store in Baton Rouge. The department said the two cops were responding to a disturbance call outside the store about 12:30 a.m. Tuesday. A caller told a dispatcher that a black man in a red shirt who was selling CDs had threatened him with a gun. Police said Wednesday that Sterling was armed.

“An altercation between Sterling and the officers ensued. Sterling was shot during the altercation and died at the scene,” the police department said in an earlier statement. 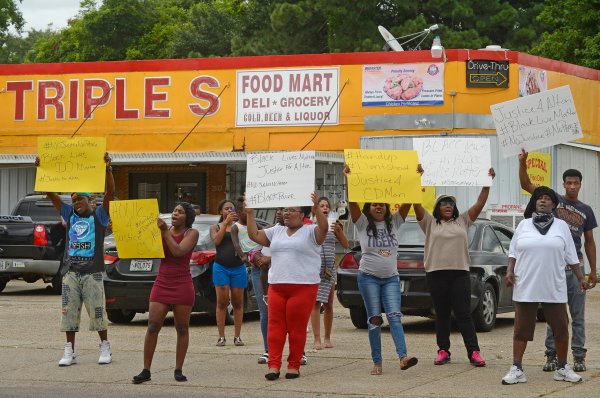