Men and boys from a camp for internally displaced people (IDP's), May 17, 2016, Makhmour Kurdistan Iraq, south of Mosul.
Yuri Kozyrev—Noor for TIME
By Jared Malsin

On a hill outside a displacement camp near the town of Makhmour, in northern Iraq, men stand near a shallow grave at dusk. They await the burial of Ahmed Mohamed Ali, a farmer in his fifties who was wounded when the Iraqi army retook a nearby village, Kabaruk, from Islamic State fighters in May.

Ali survived the battle but like the thousands now living in tents at the Debaga Camp, he had to flee the fighting. He collapsed at a mosque, the men say, unsure of the exact medical cause of his death. His wife and children, also wounded, had been hospitalized nearby. There are other graves on the hillside, some with only cinderblocks for headstones.

An hour passes and the men walk away. The sun drops below the horizon. The sky turns from blue to grey and deep blue. Without warning, a large procession of men and boys comes rolling down the hill from the gate of the camp. They walk fast, carrying a wooden coffin almost in silence. The dirt and scrub crunches under their feet. They lower the body into the grave, then spades move the dirt. One young man sobs on another’s shoulder. They kneel for prayer, and then drift back up the hill to the camp.

Death is frequent in Iraq. Since the American-British invasion in 2003, hundreds of thousands have died as a direct or indirect result of the conflict. The country’s armed factions remain locked in a struggle with the forces of the Islamic State, whose ongoing campaign of terror most recently featured a suicide bombing near a Baghdad shopping center that killed at least 250 people and wounded nearly 200 others early on Sunday. The attack was the deadliest since the 2003 invasion.

On Wednesday, a British government commission released the results of a seven-year investigation into the U.K.’s role in the invasion and occupation of Iraq. The report from the inquiry, led by former civil servant Sir John Chilcot, makes for damning reading, blaming the British government for acting on flawed intelligence against a state that did not pose an imminent threat, and failing to plan for the aftermath. Meanwhile in Iraq, ordinary people are living and dying with the legacy of the 2003 invasion every day.

That incursion triggered a bloody insurgency lead primarily by Sunni Arab Iraqis against U.S. and British occupying forces. The insurrection soon spawned a civil war in which extremists preyed on sectarian tensions. Jihadist groups including al-Qaeda thrived in the chaos, forming the nucleus of what would within a decade become ISIS. Islamic State militants now control large parts of the Iraq. The Iraqi armed forces and allied militias are fighting back and have reclaimed key cities from the jihadists, but the country’s military and security institutions are still struggling to rebuild after they were all but dismantled by U.S.-led coalition authorities in 2003.

As a result of the undoing of Iraqi institutions, and the failure of U.S. and British authorities to prepare for the aftermath, the Iraqi state often fails to provide basic services from healthcare to sanitation to security. On a more fundamental level, the Iraqi state can no longer maintain control of all Iraq’s territory. When ISIS fighters swept across the border from Syria in 2014, the rebuilt Iraqi military crumpled.

“We’re now still seeing to this day the devastating impact of having an extremely ill-thought out, poorly prepared plan for invasion,” says Nussaibah Younis, an Iraq analyst affiliated with the Atlantic Council in Washington. “The challenges that face Iraq today are so monumental that they will take at least a generation to be resolved,” she adds in a phone interview.

Measuring the human cost of the war is difficult. U.S. authorities chose not to record the number of Iraqi civilians killed. A nonprofit group called Iraq Body Count reports that between 160,400 and 179,312 civilians have been killed by violence since the 2003 invasion, a figure based on cross-referenced media reports. An epidemiological study based on a house-to-house survey published in the British medical journal The Lancet in 2006 found that nearly 655,000 Iraqis had died following the invasion, but debate continues about those figures and others. Some 4,822 military personnel from the U.S.-led coalition have died in Iraq.

The invasion toppled the brutal regime of Saddam Hussein, and many Iraqis were euphoric to shed the Baathist system of rule. But after 13 years of war and civil strife, some are reexamining the moment their country transitioned from authoritarian rule to chaos.

Even the man who felled the statue of Saddam in central Baghdad in 2003 now says he regrets how Iraq turned out. Kadhim Sharif Hassan Al-Jabbouri, who had been jailed for a year and a half under Baathist regime told the BBC, “Saddam is gone, but in his place we now have a thousand Saddams.”

Some Iraqis and outside observers argue that instead of ending the corruption and abuses of the Saddam era, the invasion simply allowed those ills to continue in a new and more chaotic form. The corruption that took hold in the Iraqi state during years of U.N.-backed sanctions on Iraq in the 1990s became endemic in the turbulent years following Saddam’s demise.

“In many cases the kinds of abuses that we’ve seen institutionalize themselves in the Iraqi system have their roots in Baathism and in Saddam’s rule,” says Younis, who is also a member of the Task Force on the Future of Iraq. “What the invasion did was rip the ceiling off. It got rid of kind of the safeguards that that system had kind of built in to prevent these types of abuses from getting out of hand,” she says.

The enduring failure of Iraq’s postwar institutions was on display on Sunday following the catastrophic bombing in the Karada neighborhood in Baghdad. Following the attack, Iraq’s interior minister resigned on Monday. He had earlier said that the recent series of ISIS bombings in Baghdad would not end until the country resolved the “disorder” in the security apparatus. Multiple competing security agencies now exist, reporting to different ministries, while Shiite-dominated militia groups grow in power.

“The reason there is terrorism in Iraq now is not because of Islam or sectarianism or any of these other things, but because of simply dismantling a functioning state and replacing it with a completely dysfunctional system,” says Sinan Antoon, an Iraqi poet and author who teaches literature at New York University.

He adds, “The question we usually get posed is, ‘Was it better under Saddam Hussein?’ And I think it should be posed the other way around. Is it worse now under the post-American regime? And I think it is worse.” 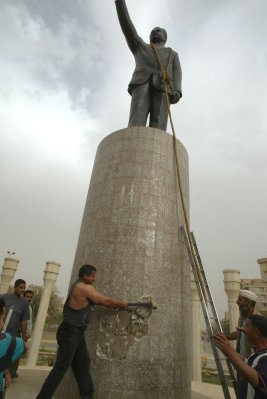 The Guy Who Toppled Saddam's Statue Wishes He Hadn't
Next Up: Editor's Pick