Will the U.K.'s Election Frontrunner Theresa May Get Shoved Off A Glass Cliff?

U.K. Home Secretary Theresa May is the current front-runner to be the next British prime minister following the UK’s Brexit disaster and the utter meltdown of the ruling Conservative Party, but what makes her—or any woman chief executive—appealing in a crisis could also hurt her in the long run.

May has been described as “steely, steady”, a figure representing “stability” in the chaos. All good things, but the instinct to turn to a woman in a time of crisis has proven perilous for May’s private sector counterparts.

Empathy makes women attractive CEOs for companies in times of distress, a phenomenon known as the glass cliff. First coined by psychology professors Michelle Ryan and Alexander Haslam a decade ago,the term refers to women and minority CEOs who are recruited to turn around struggling companies. For example, Mary Barra at General Motors, Marissa Mayer at Yahoo—who became the first pregnant Fortune 500 CEO when she was hired in 2012—and Virginia “Ginni” Rometty at IBM were all hired to turn around those companies. But the glass cliff can be dangerous. It has forced more female CEOs out of their jobs for under performance than their male counterparts—38 percent of women compared to 27 percent of men in the last 10 years, according to a PriceWaterhouse Coopers study.

Bringing in a woman is also a good public-relations move: generally speaking, a woman is harder to attack and criticize for a company’s missteps. For example, NBC’s Matt Lauer grilled GM’s Mary Barra on The Today Show in June 2014 on a scandal over faulty parts linked to deaths. “There are some people who are speculating that you got this job as a woman and as a mom because people within General Motors knew this company was in for a very tough time, and as a woman and a mom you could present a softer face and a softer image for the company as it goes through the episode,” he said.

“Well, that is absolutely not true,” she told Lauer. “You know, I believe I was selected for this job based on my qualifications.”

Lauer pressed further. “You’re a mom, I mentioned, two kids, you said in an interview not long ago that your kids said they’re going to hold you accountable for one job, and that is being a mom,” he said. “Given the pressure at General Motors, can you do both well?”

“You know, I think I can,” Barra responded. “I have a great team, we’re on the right path, we’re doing the right things, we’re taking accountability and also I have a wonderful family and a supportive husband, and I’m pretty proud of my kids the way they’re supporting me in this.”

Lauer’s questions sparked arguably a bigger furor than the faulty parts scandal. “Would he ever contemplate asking Alan Mulally at Ford, or Sergio Marchionne at Fiat Chrysler, if they could be a good CEO and a good parent at the same time?” business columnist Tom Walsh wrote in the Detroit Free Press. Bryce Covert of Think Progress turned the tables on Lauer. “Lauer himself is a father of three children, but that hasn’t stopped him from doing his job, which has included, among other things, traveling to 50 locations for the Where In The World Is Matt Lauer segment, or standing in for Bob Costas to host the Sochi Olympics in Russia.”

A second glass cliff study, by Utah State University, found that boards view women as being upbeat and warm enough to motivate employees during tough times. “[A woman’s] messaging might be ‘We will overcome this,’ versus; ‘Do this because I’m boss,’” said Annette Zimmerman, who became CEO of PrimeWay Federal Credit Union when it merged with a failed credit union. The same study found in the vast majority of cases, female stewards of struggling companies are ultimately replaced by white men.

Taking the reins of a troubled company is a risk, the studies found, because the tenure is generally short and the chance to shine small. And failure perpetuates stereotypes that women can’t lead. “If you do well, it’s because of your gender. If you don’t do well, it’s because of your gender,” Elizabeth Dickinson, assistant professor at the Kenan-Flagler Business School at the University of North Carolina Chapel Hill told the Guardian newspaper. “The question is: are those women being judged for the jobs that they do, their skills, or their experience? Or are they judged first for being women?”

Of course, Germany’s Angela Merkel became the first female German chancellor in 2005 thanks to a political crisis, but she kept off one cliff while the global economic jumped off another. The refugee crisis in Europe could potentially be one crisis too many, but Merkel has long ago proven herself beyond talk of glass cliffs—after 11 years she has become more of an institution than a passing fad. Hillary Clinton is vying for the U.S. presidency, but unless one considers Donald Trump a crisis, if she wins it won’t be because of a crisis akin to the one boosting May in the UK right now—indeed, Clinton has been around and in the U.S. public eye for decades. If Clinton wins, it can hardly be argued she’s potentially a lighter-weight seat warmer, there to bolster spirits and give a good PR face until a heavy weight comes in. (If May and Clinton win this fall, women will helm the world’s top three Western economies.)

Not every woman will win an election because of the glass cliff phenomenon, but until more women are elected to executive office, the effect is that their stewardship of crises may be judged as representative of all women, not just themselves. And some women do rise to the challenge and turn a cliff into a a mountain that they successfully scale. An economic crisis helped elect Margaret Thatcher Britain’s first female prime minister in 1979, but it was her utter competence that kept her at Britain’s helm for the next 11 years. 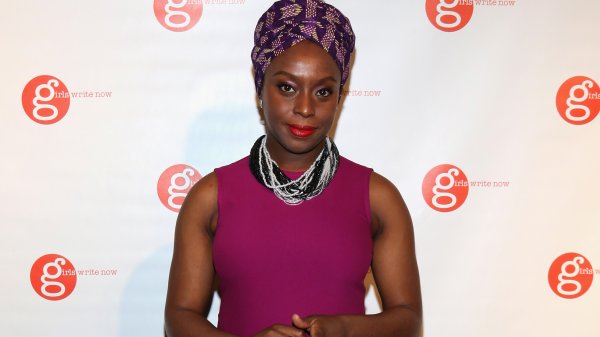 Chimamanda Ngozi Adichie Had a Baby and None of Us Knew
Next Up: Editor's Pick