ISIS Attacks Spike Even As It Loses Ground at Home

More than 200 people were killed in an ISIS-claimed attack in Baghdad on Sunday.
Amir Saadi / Anadolu Agency / Getty Images
By Mark Thompson

You almost can hear the clock ticking: can the U.S. destroy ISIS before it launches more major terror attacks inside the U.S.?

The good news is the U.S.-led coalition is slowly taking back territory once claimed by ISIS’s self-proclaimed caliphate. The bad news is that may have helped trigger a spate of attacks, either directed or inspired by ISIS, that have been exploding around the globe like a series of deadly July 4 fireworks.

On June 28, three suicide bombers killed 45 at Turkey’s main airport. Terrorists killed 20 in the Bangladeshi capital of Dhaka last Friday. On Saturday, a truck bomb exploded in Baghdad’s Karrada neighborhood, killing at least 215. There also have been deadly attacks in recent days in Saudi Arabia and Yemen.

ISIS took to social media during the just-ended Muslim holy month of Ramadan, and urged its followers to strike where they live, with whatever weapons they have at hand. Even if only 1% of 1% of the world’s 1.6 billion Muslims are swayed by such messages, that’s 160,000 fighters—a force roughly the size of the U.S. Marine Corps.

Pentagon officials have long warned that as the U.S.-led effort against ISIS’s grinds the proto-state straddling Iraq and Syria into rubble (it has lost 47% of its Iraqi territory, and 20% in Syria, U.S. officials say), ISIS backers would lash out with terror attacks far from the front lines. That appears to be what is now happening. Instead of traveling to the caliphate, many are electing to do their fighting at home.

The spate of terror strikes comes as the U.S.-led coalition has shrunk the territory controlled by the “so-called caliphate, recapturing key terrain including major cities, infrastructure and economic nodes,” Pentagon spokesman Peter Cook said Tuesday. “The sheer numbers of the attacks recently would suggest that {ISIS] is looking to carry out these kind of attacks at the same time that it is losing territory, losing leadership, losing its finances, losing its messaging capabilities in Iraq and Syria.”

Americans, naturally, are horrified by such attacks, but react far more viscerally when they happen on U.S. soil, such as the Orlando nightclub attack that killed 49 on June 12, or the San Bernardino shootings that killed 14 last December. At U.S. intelligence outposts here and abroad, analysts are sifting through incoming chatter, looking for any clues of on impending attack. They say they detect none.

Two years ago last week, leader Abu Bakr Baghdadi declared his nascent state the caliphate after a stunning series of military victories. But the ISIS conflagration raging across Iraq and Syria has been halted, and air strikes and local fighting forces on the ground have curbed its reach. But the flames still burn hotly in ISIS strongholds like Mosul, in Iraq, and its self-declared capital in the Syrian city of Raqqa. Even a contained fire can spew embers far away.

“The time allowed the Islamic State to function—now going on two years—is one of the principal causes of the atrocities the Islamic State has instigated against innocent civilians in the immediate region, Paris, Brussels, Orlando, and most recently Istanbul,” says David Deptula, a retired Air Force lieutenant general who has argued the U.S.-led campaign against ISIS has been too modest. “The elimination of the Islamic State as a functioning organization should be the primary focus of our strategy.”

The U.S., despite claims to the contrary, doesn’t appear to be in much of a rush. U.S. officials say they can’t do more than their Iraqi allies permit. That’s true, and will remain so unless there is a major attack inside the U.S., in which case such diplomatic niceties will evaporate. American fingers are crossed.

Cook said this week’s NATO summit in Warsaw will discuss “how to strengthen the campaign” against ISIS, and that a follow-on meeting in Washington in late July among anti-ISIS nations will ponder how to “to further accelerate it”—pledges that have been made repeatedly in recent months. But the Obama Administration has no intention of changing its approach. “Our basic strategy,” Cook said, “remains the same.”

The U.S. government’s bet has been that as ISIS smolders, its appeal to wayward Muslims around the world will shrink. Once extinguished, they believe, supporters will give up their fight. But that, of course, supposes their real allegiance is to the caliphate itself. Yet ISIS’ zealotry may be just as much ideology as real estate. Soldiers can regain territory, but they can’t change minds. 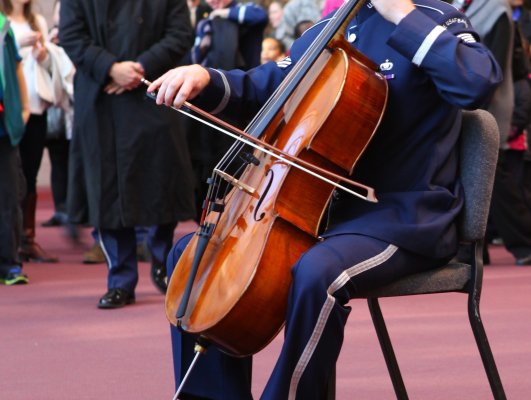 The $75,000 Cello: One Reason Military Bands Hit a Sour Note
Next Up: Editor's Pick