President Obama: 'Hillary Got Me Fired Up'

President Obama and presumptive Democratic nominee Hillary Clinton praised one another at a rally in Charlotte, N.C. on Tuesday, the first time he’s hit the stump with his one-time rival and former Secretary of State during her campaign.

“My faith in Hillary Clinton has always been rewarded,” Obama said, after taking the stage and repeating his own campaign rallying cry, telling the crowd, “Hillary got me fired up.”

“There has never been any man or woman more qualified for this office than Hillary Clinton, and that’s the truth,” he said later.

Both Clinton and Obama referenced their past as Democratic primary opponents.

“At the end of our contest, I saw the grace and the energy with which she threw herself into my campaign.” Obama said. “We may have gone toe to toe from coast to coast, but we stood shoulder to shoulder for the ideals that we shared.”

“This, my friends, is a president who knows how to keep us safe and strong. Compare that to Donald Trump. Can you imagine him sitting in the Oval Office the next time America faces a crisis?” Clinton said.

Obama endorsed Clinton last month in a video, saying he didn’t think “there’s ever been someone so qualified to hold this office.” In a new video released Tuesday by Clinton’s campaign, Obama praised her for “tirelessly” supporting his presidential bid after losing the 2008 primary.

Their rally comes after FBI Director James Comey recommended that no criminal charges be brought against Clinton in the investigation into her use of a private email server as Secretary of State—a decision that many Republicans swiftly criticized. 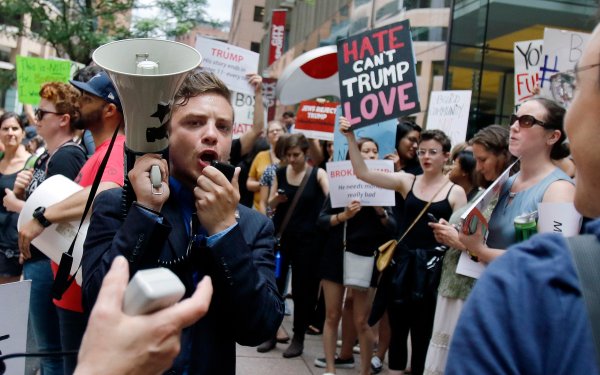 Tens of Thousands of Protesters Expected at GOP Convention
Next Up: Editor's Pick