Stephen Colbert Wins for Best Meet-Cute with His Wife

We all know Stephen Colbert as a whip-smart comedian with a penchant for biting commentary. But it turns out the sarcastic funnyman has a soft side, too. Before taping his “Late Show” on Monday night, he took an audience question about how he met his wife, launching into a very sweet story about the couple’s meet-cute.

A younger Colbert was back home in Charleston, S.C., having just decided to end a different, serious relationship, when he and his mother went to a show together.

“So I go, I walk into the lobby with my mom,” Colbert said. “I’m wearing a sharkskin suit, looking pretty good. I’m about 40 pounds lighter than I am now. And I’ve got a beard. And I walk in and I see across the lobby this woman, I think, for the first time. Not girl, woman. Beautiful woman in a black linen dress standing below one of the sconces in the lobby, and I think, ‘her!’ Honest to God, I thought, ‘There’s your wife, you’re going to marry her.'” Colbert and the mysterious woman spent the evening “shooting eyes” at each other until they finally crossed paths at the buffet table — and realized they had actually grown up together, although they’d attended different schools. Colbert was “completely taken,” he said, but wasn’t sure if she felt the same way, so decided to test her interest.

“I’m going to give her one minute to get away… so I turned my back for what now is clearly, to me, the most harrowing minute of my life. What if she’d gone away? But she didn’t! She was still there when I turned around. Smiling at me. And now we’re married,” he said. They’ve been together for over 20 years.

Everybody together, now: awwww. 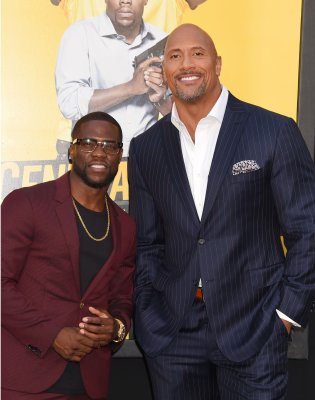 The Rock and Kevin Hart Can Impersonate Each Other Perfectly
Next Up: Editor's Pick