See the Stunning First-Ever Video of Jupiter and Its Moons

You’re not going to find a lot of romance in orbital physics. Little objects orbit big objects; big objects orbit bigger objects. The entire galaxy orbits around a central pivot point. It’s all momentum and velocity and the hard hand of gravity. And then all at once it becomes a bit of poetry. If you didn’t believe that already, the Juno spacecraft should change your mind.

Juno, a four-ton (3,600 kg), 11-ft. (3.5 m) robot probe which entered orbit around Jupiter at 11:35 p.m. EDT on July 4, is not NASA’s biggest or most dramatic or most complex spacecraft. But it made a first impression like none other. On its final approach to Jupiter, it captured a series of still images that, run in sequence, produced the first ever video of the giant planet being orbited by its four large moons: Io, Europa, Ganymede and Callisto. All by themselves, the so-called Galilean moons (named after Galileo Galilei, who discovered them in 1610) are some of the most interesting bodies in the solar system. And Europa in particular is considered by most astronomers to be the likeliest home for life in the solar system, after Earth.

But it’s the balletic quality of the simple video that makes it so striking—the way it recapitulates the structure of the solar system and even the atom. Mission scientist Scott Bolton—who like most scientists, is an empiricist more than lyricist—made those and other points in a surprisingly dreamy way, when the video was released at a press conference at the Jet Propulsion Laboratory in Pasadena, Calif. after the successful entry to orbit.

“For the first time,” Bolton said, “all of us together will actually be able to see the true harmony in nature…It’s harmony at every scale.” That harmony, apparently, even reaches down to touch the scientists themselves. 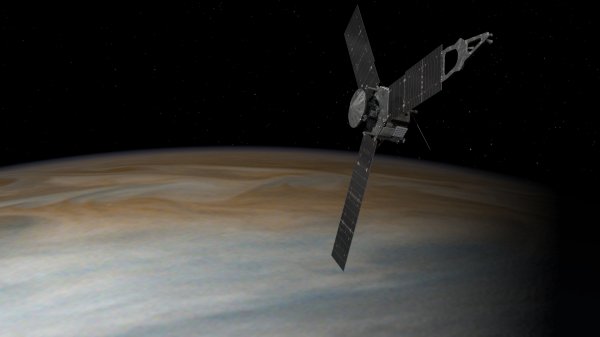