Survivors lay wreaths at the Wall of Death during the 70th anniversary of the liberation of the Nazi German concentration and extermination camp, Auschwitz-Birkenau in Aushwitz on Jan. 27, 2015.
Gallo Images—Getty Images
By Melissa Chan

Auschwitz survivor Elie Wiesel brought voice to the millions of people silenced in the Holocaust and served as an advocate for peace to make sure the horrors of the past did not repeat itself before he died Saturday at 87.

Now, it’s up to the rest of the world to preserve his memory and continue his legacy as the number of living Jewish survivors — especially those who can still eloquently speak of the atrocities — dwindles to about 100,000 in the world, advocates say.

“The number of eloquent survivors is few and far between,” said Michael Zank, 58, the director of the Elie Wiesel Center for Jewish Studies at Boston University, who was mentored by Wiesel. “It puts the responsibility on us, the next generation, the children of survivors, the grandchildren of survivors, to become as articulate as we can be in maintaining this memory and the mandate that comes with it.”

There are about 100,000 Jews who were in camps, ghettos and in hiding under Nazi occupation who are still alive today, according to the Conference on Jewish Material Claims Against Germany, one of the few international organizations that tracks that type of data. The group, which negotiates with Germany’s government for payments to Holocaust victims and provides social services for survivors, said there were about 500,000 living survivors, including those who fled Nazi Germany, in 2014.

“The loss of Elie Wiesel represents a loss not only to Jewish Nazi victims, whom Elie tirelessly advocated for over the course of his lifetime, but to humanity as a whole,” Claims Conference President Julius Berman said in a statement. “We are losing survivors, like Elie, with first-hand accounts of the Holocaust every day. For this reason it is incumbent on us to record, document and represent survivors’ experiences and keep them in the public consciousness, lest we forget the depths to which society is capable of sinking.”

Wiesel wrote the internationally acclaimed memoir Night and was honored with the Nobel Peace Prize in 1986. The Nobel committee at the time said he had “emerged as one of the most important spiritual leaders and guides in an age when violence, repression and racism continue to characterize the world.”

“A lot of people just wanted to forget and move on,” Zank said. “He found a way of speaking about the experience in a way that had not been able to be properly expressed.”

“He brought survivors together that were in many ways not unified in how to remember the Holocaust,” he added. “People who knew him felt that his charisma and his wit and his personality were priceless to know and experience. To have lost that personality and the opportunity to meet him, to me, that’s the real loss.” 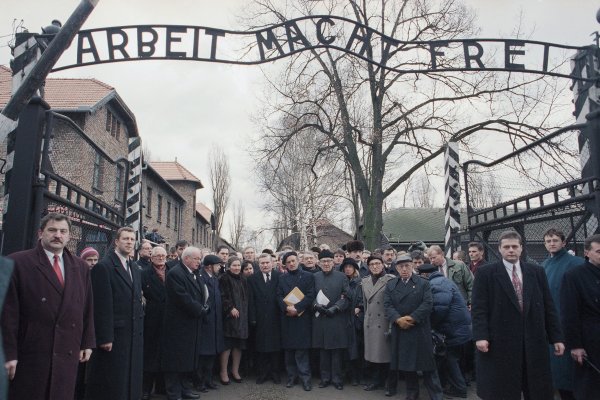 Elie Wiesel Was the World’s Moral Compass
Next Up: Editor's Pick