The Tight North Carolina Governor's Race Is Being Fought by Outsiders

It’s shaping up as the nation’s hottest governor’s race, but the two actual candidates in North Carolina are not the ones controlling the conversation.

Instead independent groups not affiliated with Republican incumbent Gov. Pat McCrory or Democratic Attorney General Roy Cooper are fighting proxy battles on the swing state’s airwaves, spending more than 47 times as much on political TV ads as the candidates.

Eleven entities — the most in any single state-level race so far — have spent more than an estimated $3.7 million for TV airtime about the environment, economy and controversial legislation such as the transgender bathroom law. They include some of the usual suspects: the Republican and Democratic governors associations, conservative bastion Americans for Prosperity, as well as a potent North Carolina environmental coalition that’s played in past elections.

McCrory’s own campaign has spent just $78,000, while Cooper’s campaign doesn’t appear to have aired any broadcast TV ads as of June 27, according to a Center for Public Integrity analysis of data from media tracking firm Kantar Media/CMAG.

Kantar Media/CMAG offers a widely accepted estimate of the money spent to air each spot. The figures do not include ads for radio, the internet, direct mail or TV ads that aired on local cable systems. And the estimates do not include the cost of making the ads.

Outside group advertising isn’t new for North Carolina, which has been an early test case in the trend of millionaire donors bypassing traditional routes and pouring cash into groups with neutral-sounding names such as Real Jobs North Carolina instead.

But what may be most surprising this year is the scale of the ads and how early they’ve started to appear: The majority of the spending has occurred since Cooper and McCrory handily beat their opponents in the March 15 primary — yet still months before most voters start focusing on who they will pick on Nov. 8.

Both candidates, meanwhile, appear to be saving their firepower, having booked millions of dollars in TV airtime in the fall, according to a Center for Public Integrity analysis of Federal Communications Commission ad contracts for 25 broadcast stations.

According to recent polls and experts, it’s a tight race, so every dollar matters as Democrats try to tip the scales in a GOP-controlled state. While McCrory and groups aligned with him spent more than $1.2 million propping up the incumbent or attacking his opponent, Cooper’s allies on the left aired $2.6 million worth of political ads against McCrory.

“North Carolina has always been a pretty politically competitive state, and both Democrats and Republicans feel it’s winnable this year,” said Kyle Kondik, a political analyst at the University of Virginia’s Center for Politics. “It is also one of the only states that should be competitive for the governor’s, senatorial and presidential races in the state, so expect a boost of outside and ‘dark money’ there.”

Nationally, candidates, political parties and outside players have so far pumped more than $53 million into TV broadcast ads about state-level races from governor to legislator in 30 states.

Outside groups account for almost 40 percent of all the TV ad spending, pouring $20.7 million into political ads this cycle.

“Donors are increasingly going to these groups so they can hide their identities and give more money without any accountability,” said Ian Vandewalker, counsel for the Brennan Center for Justice, which advocates for campaign finance reform.

About one-fourth of the outside players this election cycle are so-called “dark money” groups, entities that aren’t required to disclose their donors.

The flood of outside groups is not a surprise to experts in North Carolina, a purple state where big donors and groups have experimented with outside money since 2010. That year, Art Pope, a billionaire former legislator who later became state budget director, pushed a coordinated strategy with such groups that helped turn the statehouse in Republicans’ favor, gaining a net total of 11 seats in the Senate and 15 in the House.

“These campaigns were very successful, and because of that success, it became a new mode of operation,” said Bob Hall, the executive director ofDemocracy North Carolina, a voting rights nonprofit.

Of the North Carolina gubernatorial ads from outside groups, 96 percent had a negative tone attacking one of the candidates, according to Kantar Media/CMAG.

“Outside groups are helpful because candidates themselves are more reluctant to put out attack ads, because that’s basically saying ‘Yes, I endorse this attack on someone else,’ instead of taking the moral high ground,” Vandewalker said. “It’s much easier to have groups with no accountability pop up for that purpose.”

Environmental groups have latched onto this strategy, decrying so-called cozy relationships between McCrory and the Charlotte-based electric and gas giant Duke Energy.

For 29 years, McCrory worked for the state’s largest utility, an economic powerhouse that has been steeped in controversy after a devastating coal ash spill in 2014. And Duke Energy is one of the top donors to McCrory’s biggest advertising supporter, the Republican Governors Association, which seeks to elect GOP governors nationwide. (Duke Energy has also contributed to the Democratic Governors Association but has given the RGA three times more money in the past five years, according to Internal Revenue Service records.)

The North Carolina Environmental Partnership, a coalition of eight environmental groups including the Natural Resources Defense Council and the Southern Environmental Law Center, spent the most money on ads in North Carolina, $1.6 million so far, that slammed McCrory for trying to cut solar energy use, endangering drinking water and those Duke Energy connections.

“Tying Gov. McCrory to Duke Energy — one of the state’s largest employers — is something far-left environmental groups have been trying to do since the last election, but the reality is that he has been the toughest governor on Duke Energy,” said Ricky Diaz, a spokesman for McCrory’s campaign.

Meanwhile the Durham-based North Carolina Waste Awareness & Reduction Network urged Cooper to change Duke Energy’s corporate charter in a series of TV ads and is running an online campaign calling on voters to force the candidates to stand up to the energy giant.

“Frankly, the opportunity is wide open for either McCrory or Cooper to distinguish himself by providing some actual leadership instead of just coddling Duke Energy,” said Jim Warren, executive director of the 28-year-old watchdog group.

“We have gotten absolutely no special treatment in any way from regulators,” said Tom Williams, a spokesman for Duke Energy.

National organizations on the right such as the Republican Governors Association and Americans for Prosperity bought ads directly under their names, while the Democratic Governors Association played one layer below the surface, putting money into NC Families First, which sponsored the ads.

In total, the Republican governors’ group leads with $664,000 worth of airtime in the North Carolina race compared with the DGA-funded group’s $558,000.

With four months of campaigning to go, expect to see record levels of cash spent, especially because of a fractured GOP base.

“There are a lot of conservative groups that really don’t like Donald Trump and aren’t inclined to spend on the presidential race,” Kondik said. “One wonders if some of that money will be redirected to more down-ballot races, which are easier for these outside interests to influence. The political system as a whole is overflowing with money, and that money has to go somewhere.” 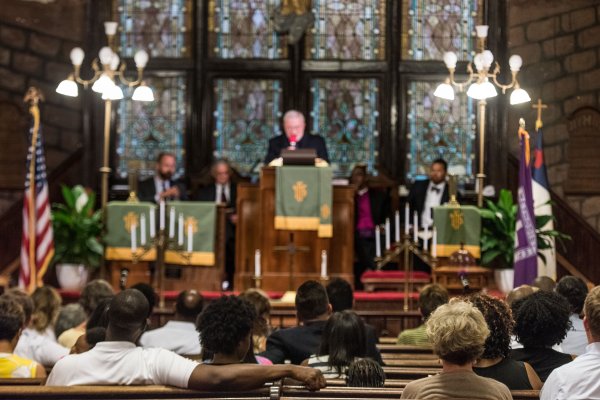 Families of Charleston Shooting Victims Are Suing the FBI
Next Up: Editor's Pick