Former IRS Commissioner Mark Everson was so unhappy about Fox News’ decision to keep him out of the first Republican presidential debate last August, he filed an official complaint with the Federal Election Commission.

Now, the former dark horse presidential contender is even more upset that it took the agency 10 months to dismiss his complaint — after deadlocking on whether Fox News had violated federal campaign finance rules governing the staging of debates.

“The FEC should either be abolished or entirely redone,” Everson told the Center for Public Integrity. “It’s a bureaucratic waste.”

His complaint — which was dismissed in late May, according to new documents released by the FEC on Thursday — has also added fuel to the bitter infighting between the agency’s three Democratic-aligned commissioners and its three Republicans.

Last year, Everson alleged that Fox News had failed to use “pre-established objective criteria,” as required by law, to determine which White House hopefuls would appear on stage during the so-called “undercard” debate in Ohio.

Fox News had initially said the top 10 Republicans in the polls would appear at the first presidential debate. Roughly two months before the event, the network announced it would hold an additional debate for other GOP candidates garnering at least 1 percent in the polls.

Ten days before the big day, Fox News relaxed that standard to include “all declared candidates whose names are consistently being offered to respondents in major national polls.”

This had the effect of ensuring the appearance of several low-polling, high-profile candidates, such as Sen. Lindsey Graham of South Carolina, former New York Gov. George Pataki and businesswoman Carly Fiorina.

Everson did not make the cut.

In a letter to the FEC, Fox News argued its decision-making fully “complied with the FEC debate regulation” and that Everson’s complaint was “without merit.”

Yet based on these facts, the FEC’s nonpartisan office of general counsel concluded that there was reason to believe that Fox News had violated the law, and could be fined. Two commissioners agreed.

“The office of general counsel said it was a clear violation of our rules,” Democrat Ann Ravel told the Center for Public Integrity. “My job here is to follow the law.”

“There’s reason to believe there may have been a violation,” added independent Steven Walther, who typically votes with the Democrats. “It was strictly a matter of what the regs say.”

Meanwhile, the FEC’s three Republicans — Lee Goodman, Caroline Hunter and Matthew Petersen — voted to find there was no reason to believe that Fox News had violated the law.

They jointly released a statement calling it “astonishing” that their own office of general counsel would conclude that Fox News had erred.

“The commission’s debate regulations cannot be used to impose government restrictions on newsroom decisions and to punish, and even censor, American press organizations,” they wrote.

“The government should not punish any newsroom’s editorial decision on how best to provide the public information about candidates for office,” Goodman added in his own statement. “How could expanding debate news coverage from 10 to 17 candidates be against the law?”

Ellen Weintraub, the commission’s third Democrat, voted to dismiss the complaint — but didn’t go as far as her Republican colleagues, who also said the commission “lacks jurisdiction to investigate or punish Fox News’ activity with respect to the debate.”

Tim Franklin, president of the Poynter Institute, a journalism-focused educational institution, said the FEC’s debate regulation “harkens back to the Paleolithic Era of the media.”

“I’m not sure how that rule fits with a 2016 media landscape,” he continued.

But supporters say the rules are on the books to ensure that debate sponsors — be those companies, nonprofit organizations or media outlets — don’t cede control to individual candidates, in turn, giving them the equivalent of a corporate contribution.

Federal law says debates must not be structured to “promote or advance one candidate over another.”

Now, for the second time in nearly three years, the FEC’s three Republicans have ramped up their argument that the agency should not regulate debate sponsors that are media companies and should more fully respect the press’ First Amendment rights.

Yet the Democratic commissioners stressed that the regulations criticized by their Republican colleagues have been on the books for decades.

“Media organizations are mentioned specifically in the debate regulations,” said Weintraub. “It’s our job to interpret those regulations”

“It’s not the role of the FEC to determine constitutionality of our rules,” added Ravel. “If our rules are unconstitutional, there needs to be a court decision that says so.”

The FEC’s ideological disagreements don’t comfort Everson, the Republican presidential candidate who previously served as the head of the IRS under President George W. Bush.

“Listen, I know bureaucracy a lot better than the Federal Election Commission, with my pedigree,” Everson told the Center for Public Integrity.

“They clearly signaled that they weren’t interested in looking at things on a contemporaneous basis,” he continued. “If there was a time to do something, it was many months ago.” 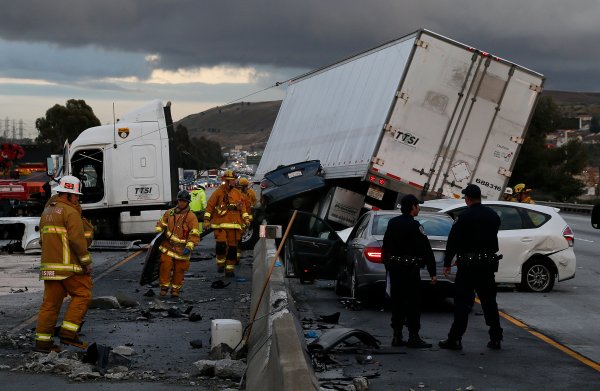 Traffic Deaths in the U.S. Rose By Almost 8% Last Year
Next Up: Editor's Pick