Hong Kong, Founded on Its Harbor, Comes to Terms With Declining Trade

Chan Yum-wo did not know anything about the maritime industry when he signed up as a dockworker in Hong Kong in 1994. But that did not matter to the former primary-school teacher. A friend told him there was good money to be made at the container terminals, and Chan needed a secure job with a steady paycheck. He had a new family to support.

It was a busy time for the city’s fabled Victoria Harbour. In fact, Hong Kong’s port was then the busiest in the world, according to statistics from Hong Kong’s Marine Department. In the year Chan joined, the equivalent of 11 million 20-ft. containers from nearly 200,000 vessels passed through the port as they crisscrossed the seas.

“We created a miracle,” says Chan, who became a founder and leader of the Union of Hong Kong Dockers.

But those days have passed. Today Chan is 65 years old, his hair is white and he hasn’t worked at the docks since February, when the number of containers moving through the terminals declined for the 18th straight month. The port that was the center of the world when Chan joined is now ranked fifth.

“It’s a sunset industry,” he says.

Hong Kong’s port is suffering, creating an existential crisis for the city. As anyone who has been on its waters will tell you, Hong Kong, an archipelago of 263 islands, is its harbor.

“I think the thing we forget is that Hong Kong only exists because of the port,” says Richard Wesley, the director of the Hong Kong Maritime Museum.

But pressure from new terminals in southern China and shifting manufacturing supply chains have taken a toll. As the port handles fewer containers each month, the workers hired by subcontractors that supply labor to the terminals are receiving fewer calls to work.

Some people remain optimistic about the port’s future and rightly point out that fifth in the world is still a tremendous slot. They speak about the developments taking place that will hopefully bring business back to the port, or at least plug the drain. Few, however, expect a return to the top.

More than 150 years ago, there were some who doubted Hong Kong’s maritime potential altogether. Lord Palmerston, the British Foreign Secretary when the Union Jack was raised over Hong Kong in 1841, was unimpressed by the island. “It will never be a mart for trade,” he famously said, calling it a “barren rock.”

But naval eyes could see that the sheltered, deep-water harbor that lay between the craggy islets lay was superbly suited to the new steel, steam-driven ships that were replacing wooden vessels, Wesley explains.

The port grew steadily under British rule through the 19th and 20th century, flourishing particularly after the creation of the People’s Republic of China following World War II. Hong Kong was well positioned to serve the shipping needs of the growing country, Wesley says, being of China but not part of it. By the late 1960s, it was clear a modern facility was needed. The advent of containerization created demands for volume and efficiency. So traditional operations were transferred to a purpose-built facility on reclaimed land in a northwestern part of Kowloon. Its first berths opened in 1972, ready to receive the world’s trade.

Today the facility, known as Kwai Tsing Container Terminals, is Hong Kong’s main port. It squeezes into a square mile nine terminals with 24 berths that offer more than 4.7 mile of frontage, according to statistics from the Hong Kong Marine Department. The site can be overwhelming. Steel containers — 8 ft. tall, 40 ft. long — are piled five, six, sometimes seven high and arranged into blocks, and the blocks are stretched into rows. Above these rows loom multistory logistics centers, grey from pollution, which are in turn dwarfed by red cranes with arms reaching skyward, then the towers and cables of a nearby suspension bridge, and finally, in the distance, mountains.

Like the sea, the vast arena constantly rolls and shifts. From the perimeter, you can watch cranes move containers from ship to shore to stack and back again, while a continuous flow of trucks emits an endless rumble and leave the air heavy with exhaust. The cycle is ceaseless.

The overall volume of containers loaded and unloaded at a port each year is called throughput and is measured in 20 ft. equivalent unit (TEU) containers, the standard of the industry. Between 2000 and 2010 throughput at Hong Kong’s port rose steadily, despite a precipitous drop following the 2008 financial crisis. But after peaking in 2011 at 24 million TEU containers, the volume fell steadily over the next four years to about 20 million in 2015, with six months of double-digit decline last year, according to statistics from the Hong Kong Maritime and Port Board.

Former challengers Shanghai and Singapore are now easily the world’s first and second busiest ports, each handling more than 150% of Hong Kong’s yearly throughput. The future does not look bright either. Deutsche Bank predicted that Hong Kong’s throughput could fall from 30% to 50% over the next decade, according to a 2015 study cited by industry publication the Journal of Commerce.

The effects of this loss have come ashore. Dockworkers used to work in teams of nine but now have to settle with seven, Chan says. Those who remain on the docks have grown older, as the younger generation turns to industries with better pay. In 1994, workers hired by subcontractors earned about $195 per 24-hour shift. Twenty-two years later, that pay has only increased by $25 — and that was only after a 40-day dockworker strike in 2013 stalled operations at the port and sparked a series of rises.

Dockworkers march during a strike at Kwai Chung container terminal, which is operated by Hong Kong International Terminals Ltd., in Hong Kong on March 29, 2013
Tyrone Siu—Reuters

At the same time, falling throughput means less work to go around. One docker tells TIME that, by his estimate, calls for jobs had fallen by as much as 30% over the past nine months. Many of his former co-workers, he said, were looking for construction jobs.

Tsz-leung Yip, an associate professor in the Department of Logistics and Maritime Studies at Hong Kong Polytechnic University, explains that container throughput has dwindled as manufacturing has moved out of southern China and into Southeast Asia. This trend has cut down the volume of profitable direct shipment, Yip says, leaving Hong Kong rely on the less lucrative business of transshipment, where containers are stored at the port temporarily as they are shifted from one ship to the next. Rival ports in Shenzhen that lurk just across the boarder on the Pearl River Delta only make matters worse.

“I personally don’t expect the business will come back,” Yip says.

To maintain competitiveness in the coming years, Hong Kong’s government has agreed to release extra parcels of land and berths at Kwai Tsing, as well as to a reorganization of the existing facility, said Jessie Chung, chair of the Hong Kong Container Terminal Operators Association. Although the changes are “not very substantial,” she says, it is “the right direction to move in” because it will offer more breathing room for transshipment cargo.

“All we hope is we will stop the decrease or even have some throughput increase,” she says. But hope is in limited supply on Hong Kong’s docksides these days. 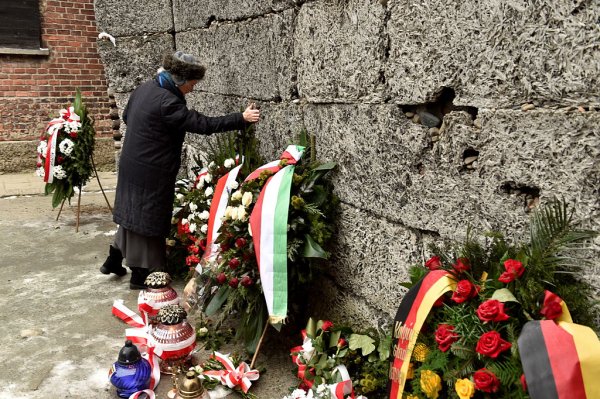 There Are Just 100,000 Holocaust Survivors Alive Today
Next Up: Editor's Pick