Nicola Sturgeon Wants Scotland to Remain in the E.U.—But the E.U. Isn't Sure

Scotland's First Minister Nicola Sturgeon delivers a speech during a media conference at the Scotland House in Brussels as she is on a one day visit to meet with EU officials, on June 29, 2016. Scotland's First Minister Nicola Sturgeon said she was "heartened" by her talks with EU officials today but said there was no "automatic easy path" to protecting her country's status in the EU after Brexit. / AFP / POOL / Geoffroy Van der Hasselt (Photo credit should read GEOFFROY VAN DER HASSELT/AFP/Getty Images)
GEOFFROY VAN DER HASSELT—AFP/Getty Images
By Charlotte McDonald-Gibson/Brussels

The Scottish First Minister Nicola Sturgeon has fired the starting gun for pro-E.U. parts of the U.K. desperate to retain their relationship with the European Union after June 23’s ‘Leave’ vote, but her visit to Brussels on Wednesday has angered other European leaders battling with their own rebellious regions.

Sturgeon was in the E.U. capital to explore legal options for Scotland to retain its relationship with the bloc through a negotiated special status, after the referendum exposed deep divides in Britain and possibly even raised the specter of a breakup of the United Kingdom. While most of England and Wales voted to leave the E.U., 62% of people in Scotland and nearly 56% in Northern Ireland voted to Remain. In London only 40% supported leaving the E.U. while in the territory of Gibraltar, on the southern tip of Spain, an overwhelming 95% voted to stay.

The result is a resurgence of secessionist sentiment: Scotland voted to remain part of the UK in a 2014 referendum on independence, but Sturgeon had said she would consider calling another referendum in light of the Leave vote. In Northern Ireland, meanwhile, some politicians are calling for a poll on a united Ireland.

The feelings of many people in the pro-E.U. regions of Britain were summed by a member of the European Parliament, Alyn Smith, in an impassioned speech on the parliament floor on Tuesday. Smith, who is a member of Sturgeon’s Scottish National Party, received a standing ovation after he pleaded with the parliament: “Scotland did not let you down; please—I beg you—do not let Scotland down now.”

Smith said that his intervention was not planned, but after listening to other MEPs—including Leave campaigner Nigel Farage of the U.K. Independence Party, who all but taunted the European Parliament over the result—he was determined to speak up for people who voted Remain. “It was obvious that the face of Britain was going to be Nigel Farage and I’m not going to let [him] speak for my country,” he told TIME. “And then it was from the heart—it was ‘my country didn’t ask for this’… There are people in the U.K feeling a real sense of bereavement that this is not what we wanted.”

Read More: The Brexit Vote Heralds a Return to the Grim 1930s for the Liberal World Order

Smith was speaking to TIME a day after Sturgeon visited Brussels for meetings with the European Parliament president and the president of the European Commission, Jean-Claude Juncker. In a bit of accidental symbolism, she arrived in Brussels on the day that the 27 other E.U. leaders held their first meeting in decades without a British Prime Minister present.

Sturgeon said she felt “heartened … to hear a willingness to listen”, but as with many other aspects of Britain’s messy exit from the bloc, there was little clarity on the potential legal options available for Scotland if it wishes to remain connected to the E.U. Smith insists that the situation right now “is not about independence”, but trying to negotiate a special status for Scotland so it retains all of the current benefits and obligations of E.U. membership. He cites the examples of Britain’s semi-autonomous Channel Islands, which are not members of the E.U. but have a relationship with the bloc.

Read More: Leadership Battles Are Embroiling Both Major U.K. Parties in the Wake of Brexit

“It is possible for different parts of states to have different relations to the E.U. — that’s the turf we are playing on,” he says. If that does not transpire, another referendum could not be ruled out: “It may well be that that’s our best option, but we’re going to look at every available option.”

And while many eurocrats in Brussels were pleased to welcome a politician representing a pro-E.U. electorate at a time when mistrust at the bloc is rising, there is a sensitivity in other European member states battling with separatist movements in their countries. With this in mind, Donald Tusk, who as President of the European Council represents the interests of the member states, notably declined to meet with Sturgeon.

Spanish Prime Minister Mariano Rajoy, who fears emboldening separatist movements in Catalonia and the Basque country, also made it clear on Wednesday that he was opposed to any separate negotiations with Scotland. “If the United Kingdom leaves, Scotland leaves,” he said, in comments echoed by French President Francois Hollande.

But the debate will not go away. Sadiq Khan, the new Mayor of London, has said he wants the capital’s interests represented in the exit negotiations. Another concern is how the vote will impact relations between Ireland and Northern Ireland. A U.K. separate from the E.U. could mean a harder border between Northern Ireland and the Republic of Ireland, an E.U. member. There are fears that any resumption of border checks could inflame old tensions.

Smith confirmed that Sturgeon is in talks with Khan and was going to engage with Northern Irish leaders as well to try and forge a bloc to strengthen their hand in negotiations. Khan and Sturgeon are also in talks with the chief minister of Gibraltar. “We need a coalition of interests,” Smith says. “These interests will be different when you get to the granular level, but for starters we need to haver representation for Scotland, London, Northern Ireland, and indeed Wales. We are not going to let Westminster speak for us.”

Most Popular on TIME
1
The Next Global Depression Is Coming and Optimism Won’t Slow It Down
2
#DontCallMeMurzyn: Black Women in Poland Are Powering the Campaign Against a Racial Slur
3
Colorado Prison Escapee Caught After Nearly 50 Years on Run 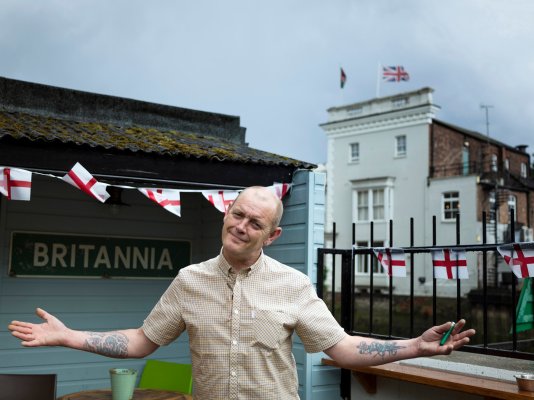