Remembering the Ladies of the American Revolution

On March 31, 1776, as the crescendo of war drums sounded towards American independence, Abigail Adams wrote a letter to her husband, John Adams, who was attending the Second Continental Congress in Philadelphia, Pennsylvania to finish work on the Declaration of Independence:

“I desire you would Remember the Ladies,” she wrote. “If perticular care and attention is not paid to the Ladies we are determined to foment a Rebelion, and will not hold ourselves bound by any laws in which we have no voice, or representation.”

Adam’s articulation on behalf of “the ladies” was indeed revolutionary, and has become one of the more famous statements on behalf of early American women’s rights. As writer Virginia Woolf observed in her book A Room of One’s Own, one significance of the end of the 18th century was that “middle class women began to write.”

However, within an 18th-century context, “the ladies” referred to an exclusive sorority of white elite female patriots, a concept that, much like the statements “all men are created equal” and “We the People,” excluded much of the population of British North America. It’s hard to fault Adams for advocating on behalf of the women of her own class, but women’s experiences during the Revolutionary era were far more diverse than is often assumed.

For example, Patriots from the English elite such as Abigail Adams and Esther Reed, author of the broadside “The Sentiments of An American Woman,” and groups such as the Daughters of Liberty, supported the cause for independence by raising funds for the Continental Army, organizing boycotts of British goods and serving as spies and messengers. Other women, such as Deborah Sampson Gannett, disguised as men and enlisted in the war as soldiers. Meanwhile, thousands of women from the lower classes encamped among the troops performing menial labor and sex work. And all along, as Anne M. Boylan observed in her book Women’s Rights in the United States, women “sought to change the definition of patriotism to include. . . the right to speak and act on political issues.”

The political empowerment English women sought to obtain by law, Native American women enjoyed by custom. In patrilineal and matrilineal tribal societies, Native women were central to tribal politics. As Lisa L. Moore, et. al. in Transatlantic Feminisms in the Age of Revolutions noted, “To the Cherokee, a nation that did not honor and enfranchise its women was a disorderly nation, a dangerous nation, a nation capable of harm.” Consequently, issues of land and cultural retention proved the deciding factor for Native women’s revolutionary-era political alliance; yet as demonstrated by Mohawk Mary “Molly” Brant (Tekonwatonti/Konwatsi-Tsiaienni) and Cherokee Nancy Ward (Nanye’hi), Native women were not a monolith.

Mary Brant was the stepdaughter of Chief Brant Canagara Duncka and the wife of Sir William Johnson, British Superintendent of Indian Affairs. She used her political influence in negotiations between her indigenous community and British colonial powers. Brant helped to secure an American defeat at the Battle of Oriskany, N.Y., on Aug. 6, 1777, by passing on information to British/Mohawk loyalists. Fearing retaliation from the Patriots, Brant and her family escaped to Canada, where she became a national heroine.

By contrast, Nancy Ward was a Ghighua or Beloved Woman of the Cherokee Nation and supporter of the Patriot cause. During the 1780s, she and the Council of Cherokee Women pressed colonial administrators on three separate occasions regarding land and women’s rights, which eroded with each treaty negotiation between Indian tribes and Colonial governments. In a speech delivered in 1781, Nancy Ward chided the U.S. Treaty Commission stating, “You know Women are always looked upon as nothing . . . Let your Women hear our words.”

And poet Phyllis Wheatley, whose remarkable life as a former-slave-turned-international-literary-sensation challenged notions that the liberty trumpeted by the Patriots should not be extended to people of African descent, eloquently addressed the meaning of freedom in a poem to The Right Honorable William, Earl of Dartmouth, who supported the Patriot cause; as well as in a letter and poem addressed to His Excellency George Washington. Wheatley threw her full support behind the leader of the Continental Army. Numerous African American women served as spies and cross-dressed to serve as soldiers. They bravely fought against the British, believing the promise that a Patriot win would mean liberation from slavery.

To the contrary, Elizabeth Freeman, known as Mum Bette, did not wait for the conclusion of the war to obtain her freedom. In 1781, two years before the American victory, Freeman filed suit in Massachusetts, in Brom and Bett v. Ashley, arguing that slavery was inconsistent with the state’s newly ratified constitution. The Massachusetts Supreme Judicial Court agreed. Freeman became the first black woman to successfully sue for her freedom in the Bay state. Her case implicitly ended slavery in Massachusetts.

The contribution of women to the American Revolution should not be an afterthought. As we celebrate the 240th birthday of the United States of America, let us remember all the ladies whose revolutionary deeds over the course of our history continues to edge us closer to the American ideals of liberty, justice and equality for all. 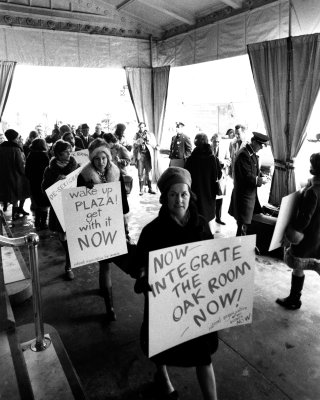