Traffic leaves San Francisco at the beginning of the 4th of July holiday weekend on June 30, 2006
David Paul Morris—Getty Images
By Justin Worland

Americans are expected to take to the roads and highways in record numbers this holiday weekend, motivated in part by gas prices that have stayed low now for years. But while cheap gas is good news for commuters and vacationers, its bad news for the planet. Consumer driving accounts for more than 16% of total U.S. greenhouse gas emissions and two years of falling gas prices has led Americans to return to buying and driving bigger cars. In mid-June, gas consumption rose to a record 9.8 million barrels per day, according to U.S. Energy Information Administration data.

“Transportation is the largest sector and it’s also a growing source of emissions,” says Dave Cooke, senior vehicles analyst at the Union of Concerned Scientists. “What goes on in the transportation sector does have a serious impact on the nation’s overall carbon footprint.”

Experts attribute much of the growth in transportation emissions to increasing population and other trends largely unrelated to gas prices, including an improving economy that has more people commuting to work. But nonetheless low gas prices affect consumer behavior. Perhaps most significantly, an unexpected increase in light truck purchases—a category that includes SUVs, minivans and pickup trucks—has surprised industry analysts. Government forecasts of future vehicle emissions assumed that consumers would continue purchasing the hybrids and smaller vehicles they did after the recession that began in 2008. But instead the truck category jumped to 40% of market share for sales of model year 2015 vehicles, accordion to preliminary figures from the Environmental Protection Agency (EPA). That represents a 4% percentage point increase from two years prior when gas prices were at near record levels.

Gas prices can also affect how far consumers drive their cars—especially on holidays. The record 36.3 million people expected to drive this weekend is at least in partly the result of low gas prices, according a AAA report. But short-term low gas prices do not tend to fundamentally shift driving patterns, says Joshua Linn, a senior fellow at the Resources for the Future think tank. The majority of miles traveled comes from traveling to work and most commuters do not have a choice about how they get to work.

“A large share of miles traveled comes from commuting,” says Linn. “In the long term, you can change where you live, but those are long term responses.”

Fortunately, environmental regulations implemented by President Barack Obama during his first months in office will have long-term effects. Obama tightened CAFE Standards—short for Corporate Average Fuel Economy—that require car manufacturers to increase the average miles per gallon of vehicles in each segment. That means that SUVs sold today are substantially more efficient than similar vehicles sold just a decade prior, somewhat mitigating the negative effect of the switch to larger vehicles on total greenhouse gas emissions.

Nonetheless low oil prices have some environmental policymakers bracing for pushback from automakers reluctant to pay the increased costs of making their vehicles emit less. One recent analysis suggested that so long as oil prices stay above $50 per barrel current levels make economic sense when factoring in the fuel savings. (Brent Crude closed Thursday at $50.61).

“If we didn’t have these standards in place, and we had this market shift to SUVs,” says Cooke, “we would be moving backwards in terms of fuel economy.” 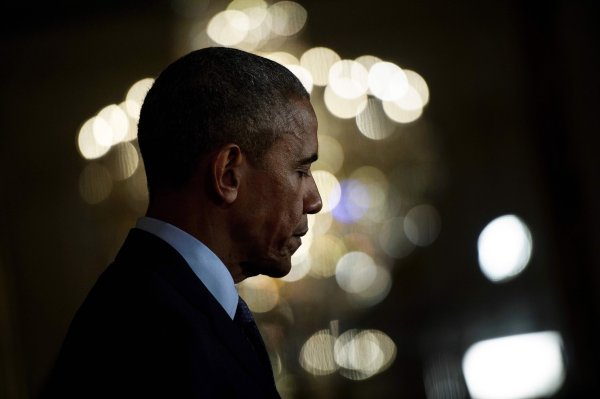 President Obama to Make Clean Energy Pledge With Canada, Mexico at Summit
Next Up: Editor's Pick