Republican nominee Donald Trump has 1% (yes, out of 100%) of support from black voters, finds a new Quinnipiac poll.

By comparison, 91% of black voters backed presumptive Democratic nominee Hillary Clinton. The poll showed Clinton leading with 42 percentage points over Trump’s 40 overall, and qualified that these returns were too close to call.

Trump had support of 47% of white voters polled over Clinton’s 30%, while Clinton beat Trump with Hispanic voters by winning 50-33%. Republican nominees traditionally have not won the majority of support from African American voters, but they’ve done better than Trump is polling now: Mitt Romney won 6% of the black vote in 2012, John McCain won 4% in 2008, and George W. Bush won 11% in 2004.

“You’re not going to find a lot of black people who openly support Donald Trump,” Trump supporter Pastor Mark Burns, an African-American preacher from South Carolina, told the New York Daily News. “If they openly supported Donald Trump, they’d get viciously attacked within their own community.” 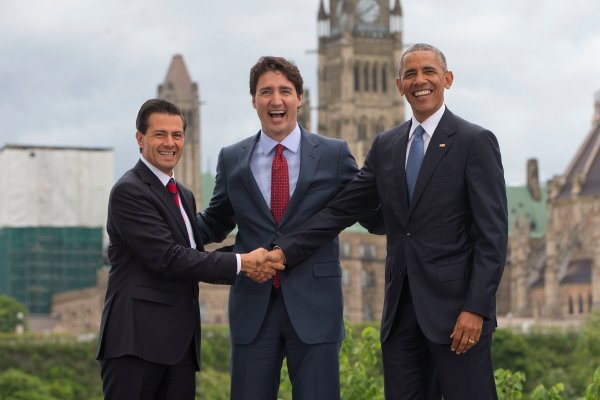 Read the Remarks From the 'Three Amigos' Summit Press Conference
Next Up: Editor's Pick