Brexit Will Erode the Values that Have Defined Europe

In Britain and across Europe, Brexit has unleashed a wave of emotion and triggered rounds of complex political calculation. Media attention has so far focused mainly on the popular reaction and the disastrous market response, but this is just the opening chapter of a story that will take time to unfold. So what can we expect in the coming months?

In Britain, the war is on inside both major political parties. For the Tories, Boris Johnson had the inside track to replace David Cameron as party leader and Prime Minister, until he shocked observers by pulling out of the leadership contest on Thursday morning, after Justice Minister Michael Gove withdrew his support. Gove himself will stand for the leadership, as will Theresa May, who backed Remain and is considered a less controversial choice. Labour Party leader Jeremy Corbyn will face a direct leadership challenge, but he will fight and may yet survive.

Neither party will have broad appeal, though the new Prime Minister could call early elections in October to try to establish a mandate. He or she will need one, because the next British government must explain to voters that they can’t have both access to the E.U.’s single market and restrictions on immigration from E.U. member states–even though some Leave supporters told voters they could have it all. Tough choices must be made.

The path toward those hard choices is a one-way street with no off-ramp. Calls for a revote are nothing more than sound and fury. Scots, who voted Remain by a wide margin, will talk up a new independence referendum because they’re angry and they want to ensure a seat for Scotland in future U.K.-E.U. negotiations. (Scottish independence will be a hard road in any case, with global oil prices so low.) Irish reunification is not on the table. London will not secede from England.

Europeans face tough choices too. Germany’s Angela Merkel, who will lead exit negotiations from the European side, must bear in mind two things. Many within her party fear that tough terms for Britain will hurt German business, but if she offers major concessions, she will empower anti-E.U. forces in France and other member states that want to follow Britain’s lead out of the union. Navigating these straits will require all of Merkel’s considerable political skill. She will err on the side of generosity toward Britain if the economic damage that Brexit inflicts on the U.K. is so obvious that no more punishment is needed to undermine anti-E.U. populists in other countries.

Finally, Brexit provides new leverage for the populist governments of eastern E.U. members like Poland and Hungary. Faced with a weakened E.U. and the threat that Brexit might encourage more members toward the exits, these countries can drive a harder bargain on immigration and other issues they care about. In particular, Poland’s government is now fighting with the European Commission over a new law that would allow the ruling Law and Justice Party to replace every judge on the country’s highest court. The Commission says this violates European standards on rule of law, and it threatens sanctions. Polish officials appear unimpressed.

Brexit has done trillions of dollars’ worth of damage to global equity markets and has thrown the very future of the United Kingdom into doubt. But the lasting damage will be to the E.U. itself–and the values it represents. 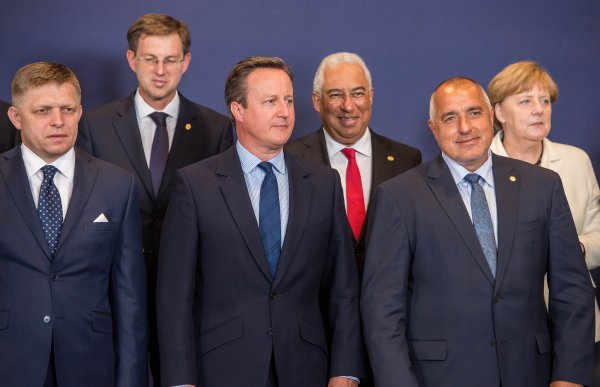 Solemn 'Last Supper' for Cameron and E.U. Leaders
Next Up: Editor's Pick