A Government Thomas Jefferson Could Love

At the dawn of the century, North Dakota was seriously considering changing its name. The thinking was that slimming down to just Dakota might offer a fresh start to a state known mostly for emptying out, its prairie towns dying along with the farmers whose kids left for brighter futures. Then came the shale-oil boom–North Dakota’s Bakken formation pumps out a million lucrative barrels a day–and a 180-degree change in fortune. “We’re No. 1 in so many things,” says Governor Jack Dalrymple, “it’s kind of ridiculous.”

One constant, however, has been the strange and wonderful relationship between North Dakotans and their state lawmakers. In many states, the legislature is a model of dysfunction, generating frustration, jokes and the occasional indictment. Here it’s a source of quiet pride. In terms of approval ratings for state governments, “a really good score is 25% or 30%,” says Karl Kurtz, formerly of the National Conference of State Legislatures. The most recent rating for North Dakota: 69%.

“Oh, they do love us,” says Al Carlson, the majority leader in the house, which, like the senate, is overwhelmingly Republican. (Not that party seems to matter: the legislature, which meets only every other year, was also unusually popular when it was controlled by Democrats.) “We’re there four months out of 24, and the other months we go home and live with the rules we made,” Carlson says.

Even the capitol is different here. Instead of meeting beneath a dome, lawmakers convene in a high-rise. When the original capitol burned down at the start of the Great Depression, the cash-strapped state sold land to build a new one with discount steel. It was an angry time. Farmers so distrusted commercial banks and flour mills that the state established its own bank and grain elevator.

The skepticism extended to government, where nearly every office is elected and power is kept diffuse. Consider: North Dakota may be the only state that guarantees every bill a floor vote, even if it lost in committee. The rule means that Ray Holmberg, who as chairman of the senate appropriations committee holds a title that would demonstrate awesome clout nearly anywhere else in the U.S., can say with a straight face, “I have no power.” Bills cannot be stuffed into drawers or held hostage. The capitol without a rotunda also eschews procedural filigrees that keep the public in the dark. And citizens know it. “If we tried to change that,” says Republican senator Ron Carlisle, first elected in 1991, “you might as well jump off the dock, ’cause it’s over.”

So it was that lawmakers voted on nearly 1,000 bills last session, convened in the winter months between the harvest and the planting seasons of farmers, which many members still are. Others are grocers, teachers, lawyers; one is a furniture saleswoman. “Every single legislator has got another life, they’ve got another job,” says Dalrymple, who served 15 years in the house. “It’s a wonderful cross section of society. It’s exactly what Jefferson had in mind.”

That’s increasingly rare in America. Big states like California, Pennsylvania and Illinois have full-time, “professional” legislatures. The smallest ones favor citizen legislatures, while about half the states have a hybrid of the two. In many, it’s not unusual for lawmakers to have a second job that benefits from their political work. This is so unlikely in North Dakota that Mary Johnson, a first-term Republican from Fargo, got the giggles when asked about it. “That is pretty funny,” she says. Her regular gig is as a CPA, and she also serves on the local park board.

It’s clearly not about the money here. North Dakota’s lawmakers are paid about $17,000 per year when the legislature is in session. Otherwise, there is a monthly salary of $481, plus $172 on days when committees meet, which is rarely before 10 a.m., to allow for the drive (cutting out hotels saved 4% of the legislative budget, Holmberg says). Rank-and-file lawmakers have no staff (even the governor drives himself) and no desk, except the tiny one on the chamber floor, where they are obliged to vote up or down–no abstentions allowed. In 1996, when other states were imposing term limits, North Dakotans voted to double the house term to four years.

“We don’t have a lot to hide,” says Leanne Dunnigan, a clerk at Eddie Bauer whose sister Lisa Meier is a legislator. “Have you driven around the state at all? You can see everything.”

It’s true. Every floor session is webcast. Lawmakers’ cell phones and home addresses are posted online, along with the name of their spouse and number of children and grandchildren. “We are really open, holy cow,” says Carlisle, who, like other legislators, notes that when people know how easy you are to reach, they are more likely to leave you alone.

Except on the Internet. But even there, the web’s anonymity is little match for North Dakota tradition. Once, after being bothered by what he found online, Carlisle phoned several commenters to say he’d read what they wrote. What came back was mostly embarrassed silence. “Felt really good,” he says, brightening at the memory. “Because I was trying to do my job.”

With only about 14,000 constituents, politics is generally neighborly. “We have party people who give you a list and say, ‘You knock on just these doors,'” says Lois Delmore, a Grand Forks Democrat. “And I’ve ignored it every election.”

Still, some say partisanship is on the rise. Republican Kathy Hawken was thrown off the house appropriations committee after writing a personal check to the campaign of her best friend, a Democrat. “People said, ‘Well, why didn’t you just use cash?’ I wanted people to know I supported her.” But with Democrats so outnumbered–2 to 1 in both chambers, and none in the Tower, the 19-story building that houses the state’s executive offices–most of the fighting is intramural. “Some of the younger ones,” says Holmberg, “have that Ted Cruz, Newt Gingrich kind of ‘They’re the enemy, they must die’ sort of thing.”

What still carries the day is a sense of common purpose. I spend two days in the Rough Rider Room, at the end of the hallway that doubles as the state hall of fame (spotlighted oil portraits of natives Lawrence Welk, Angie Dickinson and Peggy Lee line the walls), watching the people’s business get genially done. At the lunch break, I join Hawken at a table with two Democrats, and she apologizes for answering an email. She is making plans for an event with the National Institute for Civil Discourse. “I’m going to be a trainer,” she says. 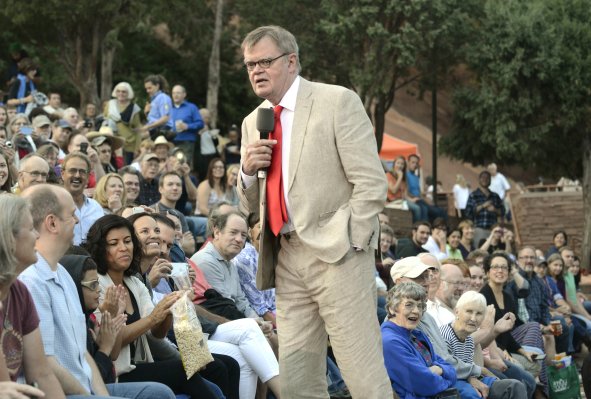