Rodrigo Duterte Has Been Sworn In as President of the Philippines

Outgoing Philippines President Benigno Aquino, second from right, shakes hands with his successor Rodrigo Duterte, second from left, during the departure ceremony for Aquino ahead of Duterte's swearing-in ceremony in Manila on June 30, 2016
Ted Aljibe—AFP/Getty Images
By Charlie Campbell

When the vote count signaled Rodrigo Duterte had won the Philippine presidential race, the populist mayor of Davao City went straight to his mother’s tomb. There he wept. “I can’t believe this,” he mumbled between tears. “I’m just a nobody.”

It was a rare show of humility for a 71-year-old better known for bringing a whole new level of vituperation to Philippine politics. In the run-up to his landslide victory May 9, Duterte joked about gang rape, threatened to “butcher” criminals and bragged about the size of his manhood.

None of that mattered to adoring voters. On Thursday, beneath the chandeliers of Manila’s Malacañang Palace, Duterte took the inauguration oath to become the 16th President of the Philippines. His daughter Veronica held the Bible.

“It is the people from whom democratic governance grows strength, and this administration is no exception,” Duterte told gathered dignitaries in his inauguration speech. “We have to listen to the murmurings of the people, give them pause, supply their needs and fortify their faith in us.”

Duterte now has six years to make good on his promise to transform the 98-million-strong archipelago nation. Here are the top five challenges for his term:

1. Economy
On paper, the Philippines is now one of Asia’s best-performing economies. Annual growth stands at 6.1%, inflation is under 2% and foreign investment is high. But the legacy of two decades of sluggish growth, following the end of the Marcos dictatorship, is still very apparent.

The current boom is largely limited to large conglomerates and lacks inclusiveness; small- and medium-sized enterprises (SMEs), which employ 60% of the total labor force, still struggle. Local banks, which are obliged by law to lend a portion of their portfolio to SMEs, prefer to pay the penalties rather than fulfill this obligation. Moreover, Manila continues to dominate the economy, even as rising living costs, poor infrastructure and choking traffic make the capital increasingly unlivable. “People are working hard and trying to be part of the economy but don’t necessarily feel the benefits,” says Ronald U. Mendoza, an economist at Ateneo de Manila University.

Duterte’s new Cabinet may try to solve all these problems by moving government departments outside the capital, thus reducing congestion, and boosting regional growth and infrastructure, in one fell swoop. This could also attract foreign investment to areas where lower costs increase competitiveness. “It also creates a safety valve for growth, so it is not all concentrated in a system that is already very much stressed,” says Mendoza.

2. Crime
Duterte was elected on promises to “eradicate” drugs, crime and corruption in six months. He served as mayor of Davao for 22 years, and is credited for turning the sprawling city of 1.5 million from the Philippines’ most deadly into one of its safest. (Even if some do challenge that claim.)

It is undeniable that death squads have operated in Davao, summarily executing suspected criminals in the street. Duterte has relished this approach — vowing to kill 100,000 criminals and dump so many bodies in Manila Bay “the fish grow fat” — while denying any explicit connection to the vigilante groups blamed for the deaths.

In his inauguration speech, Duterte said the “fight” against crime “will be relentless and it will be sustained.” However, he added, “As a lawyer and former prosecutor, I know what is illegal and what is not. My adherence to due process and the rule of law is uncompromising.”

Since the election, though, Duterte has openly called for police across the country to kill criminals. He has announced plans to pay almost $30,000 to police officers who get rid of drug lords, with lesser prizes for minor thugs. When police in a northern province recently gunned down a suspected drug dealer, Duterte personally handed over $6,000. Unsurprisingly, police killings have spiked 400% to an average of one each day nationwide since his election victory, according to Reuters. Duterte also wants to reintroduce the death penalty.

All of this worries human-rights advocates, who allege that several hundred innocents have been caught up in Duterte’s Davao dragnet. ”Duterte will be entrusted with ensuring the protection of the universal rights and freedoms of Filipinos and he therefore needs to be a symbol of rule of law rather than of violent, extrajudicial methods which undermine it,” says Phelim Kine, deputy director of Human Rights Watch’s Asia division.

3. South China Sea
Under outgoing President Benigno “Noynoy” Aquino III, the Philippines has been a staunch U.S. ally and among the most bullish in standing up to Beijing’s sweeping territorial claims in the South China Sea. Both Manila and Beijing claim the apparently resource-rich Spratly Islands, with tensions rising over China’s recent construction of military bases and airstrips in the area.

Worryingly for Washington, Duterte has distanced himself from this key alliance, instead saying, “We will be charting a course of our own.” Duterte has adopted a pragmatic tone with China, saying war is unthinkable, and expressing support for bilateral dialogue and international arbitration (a decision on the dispute, though unlikely to be binding, is expected at the Hague very shortly).

Duterte has also suggested the joint exploration of oil and gas under the reefs, and using the revenue to build a high-speed railway across Mindanao and Luzon. Already, Beijing has offered to help with rail infrastructure, says Duterte.

“How would [Duterte] expect to be treated by China as an asymmetrical peer?” asks Franco. “They will just treat [the Philippines] as a vassal state.”

4. Southern insurgency
The south of the Philippines, particularly Duterte’s home island of Mindanao, has long been a cauldron of Marxist and ethnic insurgency. Despite government peace deals with the two main rebel armies, splinter groups are continuing a conflict that has claimed some 120,000 lives since the 1970s.

In recent weeks, Abu Sayyaf, a local terrorist group that has pledged allegiance to the Islamic State of Iraq and Greater Syria, shocked the world by beheading two Canadian hostages and kidnapping a slew of other foreign nationals. Ramped up naval sorties targeting the rag-tag outfit are “unlikely to significantly reduce kidnap-for-ransom incidents,” says Anton Alifandi, principal analyst for the IHS analysis firm.

Duterte has been sympathetic to some rebel grievances and long advocated federalism to bring about a lasting peace. However, details are sparse about how such a system would come about, and how much local support it would retain were, as one might expect, the considerable subsidies Mindanao currently enjoys from Manila scaled back.

Duterte’s own record is problematic. He is tight with the old guard of the communist New People’s Army, even personally collecting five kidnapped policemen in the run-up to the May polls. But his connections with the next generation are less clear-cut, and his success in ridding Davao of insurgency is largely due to paying “revolutionary tax” so the guerrillas take their activities elsewhere. In 2013, he encouraged local businessmen to do the same.

But now his responsibility has swelled from one city to the whole country. “If that strategy of displacement is used nationwide, where will they go?” asks Franco.

5. Remaining presidential
In the wake of Duterte’s victory, his campaign manager, Peter Lavina, reassured reporters that the bombast and boorishness of the campaign trail would not carry forward into the dignified surrounds of the Malacañang Palace.

Since his election, though, Duterte’s self-professed “dirty mouth” hasn’t stopped. He has openly mocked local Catholic bishops, quizzed a reporter about his wife’s genitals, and insisted that journalists “are not exempted from assassination if you’re a son of a bitch.”

When the Reporters Without Borders called for a press boycott to object to the latter remark — and pointed out that the Philippines is already one of the world’s most dangerous places for media professionals — Duterte vowed not speak the press for the entirety of his term. 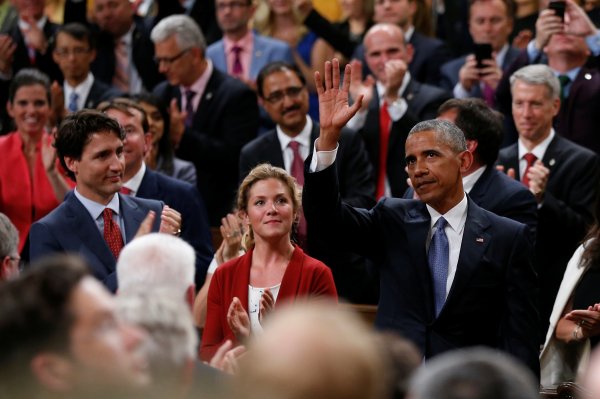 Canadian Lawmakers Chant for '4 More Years' of Obama
Next Up: Editor's Pick