Carr made the gesture at a rally in Bangor, Maine after mentioning Massachusetts Sen. Elizabeth Warren, whom Trump has given the racially-charged nickname of “Pocahontas.” Trump has accused her of lying about her heritage, and his supporters have also chanted Indian war cries at previous rallies, the New York Times reported.

“We are outraged at the lack of cultural sensitivity and ignorance being portrayed as the race towards the White House continues,” said Jackie Pata, executive director of the National Congress of American Indians, in a statement on Wednesday. “This is not a fight about political correctness, but rather a matter of respect for our people, our lands, our governments, and our youth.”

Warren, who has said she is part Native American, has been criticized for using her heritage to gain an advantage in her academic career. Former Massachusetts Sen. Scott Brown, who was defeated by Warren in a 2012 election, called this week for her to take a DNA test to prove her heritage. 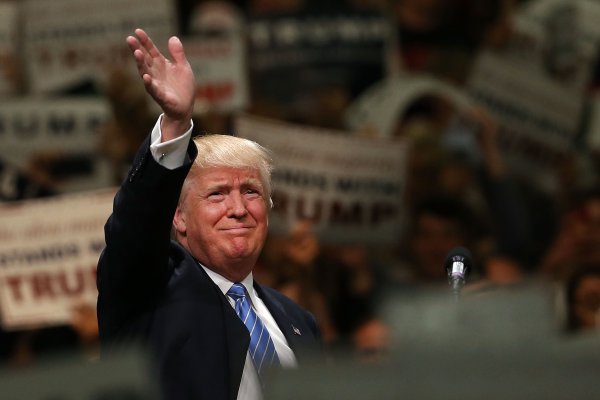 Donald Trump Dating Site Founder: 'You're Not Alone'
Next Up: Editor's Pick