The One Thing Democrats and Republicans Agree On

Korkeakivi is the author of Shining Sea, out in Aug. 9

In this divisive political time, there is one topic that candidates on both sides of the aisle seem to agree on: the importance of meeting the needs of our veterans more effectively.

There is one aspect of the veteran experience, however, that doesn’t seem to garner much attention: what is its long-lasting effect on society and on the families of veterans in particular? I’ve been giving this question a lot of thought since my father died four years ago.

My father left college in 1942 after his freshman year to join the war effort. He was stationed in Italy and served first as infantry and then as a code-breaker. He served for three years, returned to school in the U.S., played clarinet in an orchestra, married and had children, and eventually became a successful businessman with his own company.

After he died, my mother, sisters and I looked in his wallet. There were no photos of us family or our dog, no business cards, no personal memos. The only inessential item my father was carrying was his honorable discharge card from the U.S. Army.

He had been carrying the card, passed from billfold to billfold, for more than 60 years. He didn’t need to have it handy for the purpose of obtaining veteran discounts. His war service simply was that important to him.

When people return from war as my father did, physically intact and without evident psychological injury, they may not speak about their experiences. But they don’t set them aside either. Those experiences often inform the rest of their lives.

My mother, the youngest girl in a large, Catholic family, was the only one of her six siblings not to serve during World War II. Unlike her brothers, she wasn’t sent into battle. Unlike her oldest sister, she didn’t join the Marines and become an airplane mechanic. Still, now 90-years-old, my mother’s memories of the war—experienced through deprivation, word of mouth, news accounts, and personal loss—are as acute as ever.

I grew up in a very different time, in the 1960s and 1970s, next door to Columbia University. My childhood memories are sprinkled with the angry faces of students blocking the campus’s front gates, with garbage cans set on fire in Riverside Park beneath my bedroom window, of sitting cross-legged beside my big sisters to watch Walter Cronkite give the nightly body count from Vietnam on the television.

My personal introduction to war was diametric to that of my parents. But I was their child—their membership in the oft-called Greatest Generation informed their every action, and it certainly informed their parenting.

I’ve puzzled over this paradox many times since discovering that card in my father’s wallet. How do we as individuals reconcile the war experiences of our family members with our own, as combatants or civilians? How deeply and permanently does war permeate society, even far—geographically and temporally—from the front lines? And, ultimately, what can we learn from it?

It’s an important question to ask an America now in the longest continuous period of war in U.S. history. President Obama said on Memorial Day, riffing off of the words of John F. Kennedy: “A nation reveals itself … by those it remembers. We do so not just by hoisting a flag, but by lifting up our neighbors. Not just by pausing in silence, but by practicing in our own lives the ideals of opportunity and liberty and equality that they fought for.”

And yet, we stand arguably more disunited than ever, with a general discourse that repeatedly focuses on differences. When did America become so profoundly polarized? A registered Democrat and avowed liberal, I’ve nonetheless always had friends and family who voted for conservatives. But I don’t believe I am personally connected to a single person who plans to vote for Donald Trump.

As we get closer to November’s election, we should all take a moment to remember what unites us—regardless of socio-economic stature, gender, race, sexual orientation or political belief. Americans will never agree on which wars are worth fighting, which conflicts demand intervention, and who is best to be our Commander-in-Chief. But we should be able to agree on the need to honor the ideals of unity our predecessors so staunchly protected, and to recognize the importance of continuing to grow their definition. We should be able to agree on our commonality of being human.

We owe this much to my father, my mother and the rest of the Greatest Generation for the sacrifices they made—to listen to the most fundamental lesson they passed down to us: when we stand together, we stand tallest. 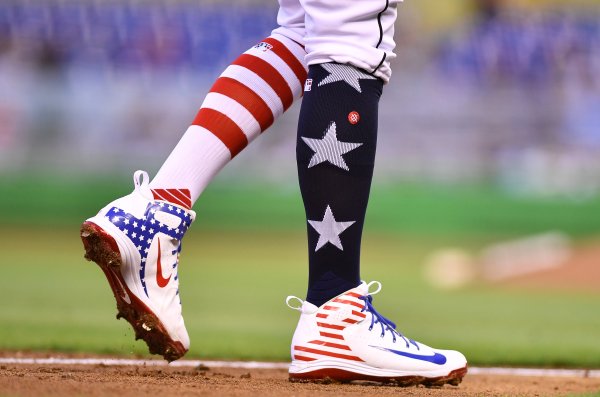 Google Doodle Scores a Home Run With Its Instantly Addictive Fourth of July Baseball Game
Next Up: Editor's Pick