When Donald Trump’s campaign manager Corey Lewandowski was fired at the end of June, his philosophy “Let Donald Trump Be Donald Trump” began to show some cracks.

Since Lewandowski’s June 20th ouster, a more professional campaign operation has slipped into place. Trump has given noticeably more policy speeches aided by teleprompters instead of his usual off-the-cuff, freewheeling rallies. And even Trump’s Twitter account, the place where the candidate traditionally has been at his most unfiltered, has marked a subtle shift: there now appears to be more than one voice in the mix.

In the most obvious example, take this tweet from June 23:

Many politicians’ Twitter accounts are run by staffers firing off links or quotes from speeches, and there’s a special denotation when it’s a tweet by the politician him or herself. (Hillary Clinton, for example, signs her tweets “- HRC”.) Trump, on the other hand, has always been the author of his own tweets. But here it seems someone else tweeted out a quote from one of Trump’s speeches under his Twitter handle.

Other tweets use more polished language than Trump’s typical fare, and promote new campaign hashtags. Take this one from June 22:

“Americanism” and “corrupt globalism” are words unlikely to appear in a Trump-written tweet; he prefers simpler language, insults and sentence fragments. (For example, “Crooked Hillary Clinton got Brexit wrong. I said LEAVE will win. She has no sense of markets and such bad judgement. Only a question of time”.) The hashtag also comes from one of Trump’s pre-written, teleprompter speeches, which he delivered on June 22, and it’s one his team is continuing to promote:

Even just looking at how Trump refers to Clinton in his tweets can be an apparent signpost of who is writing the message. Trump almost always calls her “Crooked Hillary,” as in this example from June 27:

But the more professional campaign tweets will refer to her more often as “Clinton”:

That doesn’t mean that Trump has retired from lobbing rhetorical bombs from his phone, or by dictating his message to an assistant. The Twitter account remains driven some days by the candidates own media habits. Late Tuesday night, he responded to a Bloomberg news story, suggesting Mike Tyson would come to the Republican nominating convention, with his trademark exclamation point at the end.

He followed up Wednesday morning with two zingers aimed at the U.S. Chamber of Commerce, a vocal critic of Trump’s promise to dismantle recent free trade agreements.

About an hour later, however, the hashtag was back, along with a graphic meant to spread the news about Trump running even with Clinton in a new national poll.

Expect much more of the same as the race continues. 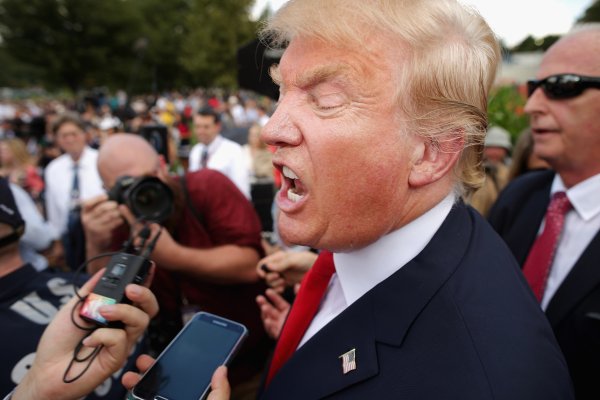