Nothing Donald Trump Says on Immigration Holds Up

Presumptive Republican candidate for President Donald Trump speaks to guests during a policy speech during a campaign stop at Alumisource on June 28, 2016 in Monessen, Pennsylvania.
Jeff Swensen—Getty Images
Ideas
By Sally Kohn
Sally Kohn is a CNN political commentator, activist, host of the podcast State of Resistance and author of The Opposite of Hate: A Field Guide to Repairing Our Humanity.

Donald Trump’s position on immigration and with respect to banning Muslims appears to be uncertain. After pledging for months to summarily round up and deport 11 million undocumented immigrants in the United States, Trump now says he would only deport what he’s called “bad dudes.” What, exactly, he would do if elected is confusing. But no more confusing than the rationales Trump has given for opposing immigrants in the first place. Trump and his supporters say it’s not about discriminating against Latinos—“They love me, I love them,” Trump insists—but all the other explanations fall flat.

Especially given the recent deadlocked Supreme Court decision that left in place a block on President Obama’s immigration plan to prevent about four million undocumented immigrants from being deported and allow them to work in the U.S., we can expect this to remain a central topic in the 2016 election. Here’s how Trump and the right’s main arguments against immigration fall apart.

Immigrant workers are actively lured to the United States largely by big business employers who don’t want to pay decent wages. But American families also rely on cheap goods and services to maintain a sense of material status. Also, after decades of wage stagnation where we’re all working more and more hours to make ends meet, U.S.-born workers rely on low-wage nannies and housekeepers and other service workers to pick up the slack of family life. According to data cited by the Wall Street Journal, every 1 new immigrant creates 1.2 new jobs for local workers. Whether immigrant workers increase or lower wages is debatable but one thing is clear: the sure fire way to ensure unscrupulous employers pay better wages would be raising the minimum wage—something the same conservatives have largely opposed.

And considering that comprehensive immigration reform—legislation both parties once supported—would boost employment, investment and productivity and grow the tax base, the jobs case against undocumented immigrants is increasingly hard to make.

Citing a study by an anti-immigrant organization, Trump said: “illegal immigrant households receive far more in welfare benefits” than native citizens. That assertion has been disputed by the conservative Cato Institute, which actually found that they are less likely to use welfare benefits than citizens—both in terms of frequency and dollar amount. After all, how can conservatives be complaining that immigrants “steal our jobs” while simultaneously complaining that immigrants are lazy good-for-nothings who mooch off the public benefits system? Not to mention that these are public benefits—including food stamps and subsidized health care—that conservatives want to get rid of for citizens, too.

Ann Coulter has written an entire book arguing that the U.S. is turning itself into “a third world hellhole” where “we no longer ask anything of immigrants in terms of assimilation.” And, Coulter implies, certain immigrants don’t want to assimilate. As the National Review’s Ramesh Ponnuru has apparently said: “It’s not so much that we have an immigration problem as that we have a problem of mass illegal immigration from one country, Mexico.” Shapiro has suggested that devout Muslims need not apply.

Jason Richwine, head of a controversial anti-immigration study published by the right wing Heritage Foundation, offered a telling example in 2013 when he said: “We have blacks, we have American Indians and even early Mexican Americans who have been living in the country for a long time and have not assimilated to the cultural mainstream as typified by white Americans.” Read that carefully again. In a country created by European immigrants who decimated the American Indian population and then built up a nation using African slave labor, whiteness is the explicit cultural standard. He further said that while the Italians and Irish could assimilate, Pakistanis and Cambodians can’t.

It’s hard to statistically measure assimilation, but one relevant data point could be that the percentage of immigrants who speak English “less than very well” grew from 43% in 1980 to 50% in 2013. At the same time, the percentage who speak English “very well” also rose from 27% to 34% in the same period. Perhaps more relevant, though, is perception—according to 2015 data, 59% of Americans believed recent immigrants don’t learn English fast enough. But this could have as much to do with race as reality, as scholars have theorized—and polls do show Americans rate Latino immigrants much more harshley than European or Asian immigrants.

Beneath all these failing arguments is the truth.

Make no mistake about it, there is the common theme in all three “arguments”—that today’s immigrants to the U.S. (as opposed to the immigrants of the past) are bad and are coming here to do harm to our economy and our way of life. The constantly shifting arguments are like a shell game to hide the their true, deeply offensive and un-American beliefs.

In other words, this has nothing to do with jobs or public benefits or whether an immigrant came lawfully or not. According to some conservatives, dark-skinned immigrants will simply never be as American as light-skinned immigrants. Because, of course, to these conservatives American-ness is synonymous with whiteness. They want to call that culture. One might also call it racism. 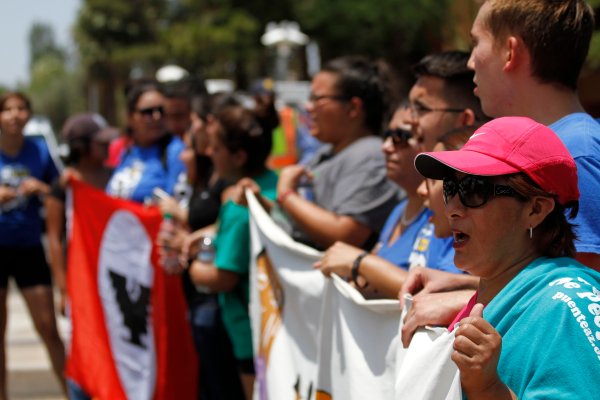 The Supreme Court's Immigration Decision Hurts Every Single American
Next Up: Editor's Pick