The NHL and Cigarette Companies Have Something Dangerous In Common

Blood on the ice: The New York Islanders and the Tampa Bay Lightning brawl during the 2016 NHL playoffs
Scott Audette; NHLI via Getty Images
Ideas
By Jeffrey Kluger
Jeffrey Kluger is Editor at Large for TIME magazine and the author of ten books, including Apollo 13, Apollo 8 and two novels for young adults. He has written more than 40 cover stories for TIME on topics ranging from space to human behavior to climate to medicine. Along with others at TIME, Kluger is an Emmy nominee for the web series A Year in Space.

It’s a good thing there’s no industry that manufactures monsoons. If there were, there would also be industry spokespeople who would take to the microphones whenever there was a flood to argue that there was still no proven link between their product and such “unpredicted deluge events.” Ditto the corporate chiefs at Big Fire, who would insist on more research to prove the link between matches and “home combustion episodes.”

That’s the way it is when you market a potentially dangerous product and want to pretend that it doesn’t really cause the harm every sentient person on the planet knows it does. It’s the way it’s been with the tobacco industry and lung cancer, big oil and global warming and, still, the National Football League and the epidemic of traumatic brain injury among its players.

Let’s stipulate what the 21.5 million people who attended NHL games in just the last season already know: Hockey is a magnificent sport. It’s fast, complex and full-contact, and that’s fine. But full-contact also means violent, which is no surprise when you have exceedingly large men carrying sticks and racing at one another across the ice at more than 30 mi. per hour (48 k/h). Violence in turn, means injuries, and injuries mean head injuries—a lot of them.

The numbers are expressed in all kinds of ways, as is the case with epidemics, but they all point in the same direction. A 2011 study, for example, found 559 physician-diagnosed concussions over a seven-season span, to say nothing of the uncounted sub-concussive hits that do their damage less visibly. A 2014 study showed, among other things, an average of 64 concussions per NHL year. The 53 concussions that occurred in the NHL’s 2014 season were actually considered a small triumph, but only compared to the 78 just two years before.

That has taken its toll, as marquee NHL names including Reg Fleming, Rob Probert, Rick Martin, Steve Mantador, Larry Zeidel and Derek Boogard all died with chronic traumatic encephalopathy (CTE), the degenerative brain condition linked to concussions. A class-action lawsuit has now been filed against the NHL by more than 200 former players, alleging that the violent style of play the league promoted led to their suffering repeated concussions.

On June 23, the day before the NHL draft, Blumenthal sent an open letter to Bettman, castigating the league for failing to take the necessary steps to protect its players. He went on to pose nine questions to the commissioner, including, “Do you believe players are adequately informed about the risks of concussions in the league when they join?”, “What changes could be made to the game to better protect athletes’ long-term health?” and “What is the current protocol for diagnosing and treating concussions?” He also posed the straight-up, shouldn’t-have-to-be-asked question: “Do you believe there is a link between CTE and hockey?” He requested a response by July 27.

Bettman responded first in an appearance on SI.com. “Senator Blumenthal doesn’t have his facts straight,” he said, “and we’ll use this as an opportunity to explain to him why he’s so misinformed.” When pressed on how Blumenthal was misinformed, Bettman demurred, explaining that “we’re subject to litigation,” but repeating that Blumenthal’s letter “is completely off the mark and we’ll use this opportunity to provide him the facts.” (The NHL office did not respond to a request from TIME seeking comment.)

Bettman did insist that the league has a “long-term record on player safety,” has been studying concussions since 1997 and has instituted rule changes to make injury less likely. But he also said this: “This is an evolving area.”

And that, right there, was the tell. Corporations that want to act do act—and they can do so nimbly. That’s the whole point of the capitalist system and the invisible hand and the keen sensitivity of the free market to changing knowledge and demands. If you want to add a GPS to the cars you sell, you add a GPS. If you want to switch from plasma screens to LED in your TVs, you do it as soon as the technology is available. The science tells you that the systems work and you happily take advantage of that fact.

If you don’t—if you reject the science or insist it must evolve or pretend that you need a few more years to study it—it’s generally because you don’t care for what that science is telling you. But the hard truth is, the science doesn’t care for you either—or at least for your attempts to argue with facts.

Cigarettes do cause cancer. Fossil fuels do heat the planet. Getting hit in the head really, really hard on any given day you show up for work will mess with your brain. If you’ve been “studying” that since 1997 and haven’t figured it out, it’s because you’re not trying.

A better glimpse into what Bettman understands or doesn’t understand is afforded by a cache of emails unsealed as part of the class action lawsuit. In 2011, after the Philadelphia Flyers’ Sean Couturier was struck in the head by a puck hit by a teammate, Bettman had this exchange with Brendan Shanahan, who was then Senior Vice President for Player Safety.

“Can you believe this run of injuries? Bettman wrote. “Couturier just took a puck to the head.”

Shanahan ran through the evening’s incidents across the league.

“Night is young!” wrote the man leading the league with a “long-term record on player safety.” Then, perhaps, he went back to studying the problem. 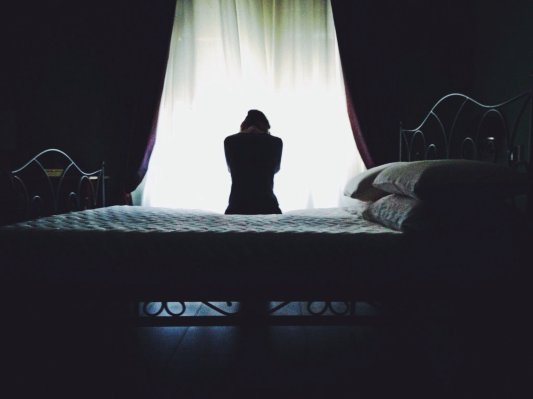 Emile Weaver and the Dangers of Denial
Next Up: Editor's Pick