Robert Murray, founder and chairman of Cleveland-based Murray Energy Corp, is viewed on a television monitor as he is interviewed.
Douglas C. Pizac—AP
By Will Drabold

When President Obama ran for reelection, Robert E. Murray, an Ohio coal company owner, said Obama’s policies were the “greatest enemy” coal country had ever faced. He organized fundraisers for Republican Mitt Romney, and turned out his workers to protest the Obama campaign in the crucial swing state, which Obama won anyway.

Four years later, Murray is still on a crusade, but this time it’s the prospect of a Hillary Clinton presidency that has led him to battle. On Tuesday, he will host a fundraiser for Republican nominee Donald Trump, who dismissed global warming as a hoax promoted by the Chinese government to hurt the U.S. economy. “What I’ve seen is what I call a political power grab of America’s power grid,” Murray told TIME Monday. “Reliable, low-cost energy in this country has been destroyed by Barack Obama. [Clinton] says she’ll expand on those policies.”

Executives like Murray, whose company produced six percent of the country’s coal in 2014, play a key role in Trump’s ability to prove he can compete with Clinton. More than 1,200 people have said they will attend an invitation-only dinner on Tuesday with Trump in Wheeling, West Virginia, Murray told TIME. He would not disclose the fundraiser’s price of admission.

A recent study found the coal industry has lost about 50,000 jobs in the five years that include Obama’s first term. Murray places much of the blame on the President’s “war on coal.” Among other regulations, Obama has increased restrictions on coal-fired power plants emissions. The administration has argued those policies are necessary to combat climate change along with improving air and water quality. Murray has sued — and won — multiple times to stop these rules from taking effect.

“Trump has said he understands the overregulation of coal and that we need to keep the coal industry alive in America,” Murray said. No Republican has won the White House without winning Ohio since 1964.

Murray said Clinton would only continue what he calls Obama’s “outlaw” policies. For her part, the Democratic nominee has said she will invest $30 billion in coal communities to retrain and educate energy workers who lost their jobs. Clinton has also been less direct about use of federal regulations to strangle coal power plants than Obama.

In 2012, Murray laid off employees after Obama was reelected, announcing the layoffs with a prayer. He later rehired some of them. This time around, Murray says his workers are even worse off. In the last year, he told TIME his company laid off three thousand employees as a result of Obama’s policies and a declining demand for coal.

“I care about my employees,” Murray said when asked why he is fighting Clinton’s candidacy. “This is why we’re going through all this to have this event for Mr. Trump.” His employees, he continued, “just want to work in honor and dignity. This is not the America that I cherish, that Obama has created and that Mrs. Clinton wants to perpetuate.” 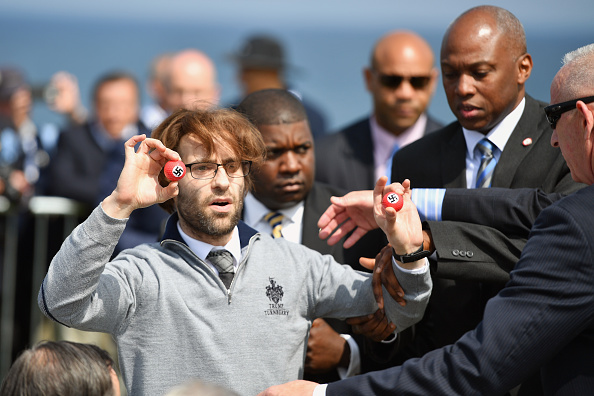 Comedian Interrupts Trump to Hand Out Swastika Golf Balls
Next Up: Editor's Pick