Nancy Northup: Women's Rights Were 'On the Brink'

Abortion rights activists cheer after the US Supreme Court struck down a Texas law placing restrictions on abortion clinics, outside of the Supreme Court on June 27, 2016 .
Mandel Ngan—AFP/Getty Images
Ideas
By Nancy Northup
Nancy Northup is the president and CEO of the Center for Reproductive Rights.

Monday’s historic decision in Whole Woman’s Health v. Hellerstedt rescued from the brink women’s constitutional right to obtain a safe and legal abortion. It’s a resounding victory and reaffirmation of more than 40 years of settled law recognizing robust constitutional protections of women’s ability to control their reproductive lives, and the dignity and personal liberty at stake in those decisions.

We were brought to the brink because Texas politicians used deceptive means to deny women what the Constitution protects. In 2013 Texas enacted HB2, a sweeping law packed with targeted attacks singling out abortion clinics for crippling and unjustified requirements, such as overhauling their facilities to become mini-hospitals. HB2 masquerades as a safety regulation, but its illicit purpose is simple and clear: to shut down the state’s abortion clinics.

And that is exactly what it has done. By the time the Supreme Court stepped in last year to block the law’s enforcement while the justices considered the case, HB2 had already devastated abortion services in the state, shuttering more than half of the 40-plus clinics that once served Texas women. Only 19 clinics remained open, in a state with nearly 27 million people. Women faced delays or the impossibility of getting an appointment. Many were hundreds of miles from the nearest clinic. Unable to afford the costs of travel, childcare and time off from work, HB2 functioned as a de facto ban on abortion for many women with limited financial means.

As the Supreme Court made clear: “The challenged provisions of HB2 close most of the abortion facilities in Texas and place added stress on those facilities able to remain open. They vastly increase the obstacles confronting women seeking abortions in Texas without providing any benefit to women’s health capable of withstanding any meaningful scrutiny. The provisions are unconstitutional on their face.”

What happens next? As a result of the decision, the Texas clinics we have fought alongside for the last three years will continue to serve their patients, and new clinics may soon open their doors in underserved areas so that the right to abortion in Texas can exist in fact, not just in law books.

Without question, Monday’s decision represents a sharp change in the prevailing winds after years of unrelenting legislative assaults on women’s rights across the country. In the last five years, lawmakers have enacted about 300 restrictions on legal abortion. Again and again, courts have had to step in to block implementation of these unconstitutional laws. It’s like a never-ending game of Whack-a-Mole: State legislatures repeatedly enact abortion restrictions. Courts block them. Politicians go back to legislative playbooks crafted by activist organizations opposed to safe and legal abortion under any circumstances—and a whole new set of insidious laws gets introduced the next year. We have sued Oklahoma eight times in the last five years, and secured seven injunctions against their anti-abortion attacks.

Louisiana will likely be the next battleground in this fight. The state already faces a challenge to a clinic shutdown law similar to one of the Texas provisions, and its legislature doubled down this year, passing seven additional restrictions. Monday’s decision puts a fine point on why those restrictions cannot stand.

As a lawyer, it’s gratifying to win and see justice done. But women should not have to run to court again and again to defend their rights—or to get the safe, legal, essential reproductive health care that the U.S. Constitution protects. One in three women in America will make the decision to end a pregnancy. Never again should we have to wait to see whether the Supreme Court will pull us back from the brink of losing our rights.

Whole Women’s Health makes clear that it’s long past time for responsible lawmakers to uphold the Constitution they have sworn to protect and respect the dignity, health and autonomy of the women they were elected to serve. 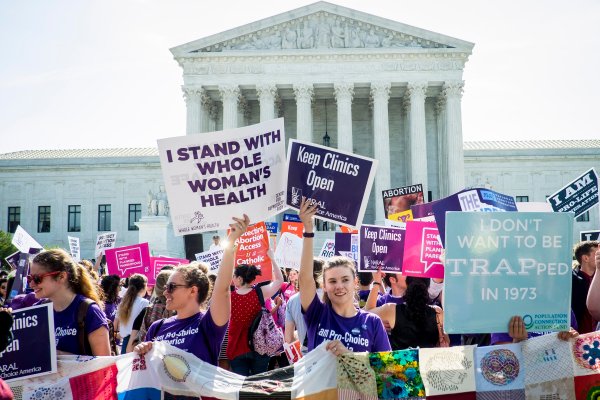 What the SCOTUS Ruling Says About the Abortion Battle
Next Up: Editor's Pick