Officials converged on Greenwich Village Monday to celebrate the dedication of the landmark Stonewall Inn as a National Monument, fêting the symbol of the gay rights movement just weeks after a shooting at a gay nightclub in Orlando shook the nation.

President Obama announced on Friday that Christopher Park (which is across the street from the bar) and 7.7 acres of the surrounding area would join the National Park system in recognition of the historic riot that took place there in 1969, CBS News reports. At the Monday ceremony, New York City Mayor Bill de Blasio noted, “We’re going to remember the struggle, we’re going to remember the people we lost, we’re going to remember that fateful night in 1969—people here were pursuing something that is a fundamental part of the founding documents of this nation: The pursuit of happiness.”

Read more: Stonewall Is the First National LGBT Rights Monument. It Won’t Be the Last

Also on the scene were Sen. Kirsten Gillibrand, Secretary of the Interior Sally Jewell and the owners of the Stonewall Inn. “It is really honoring the Stonewall veterans,” said co-owner Stacy Lentz, “and all the people who have worked on the struggle for equality.” 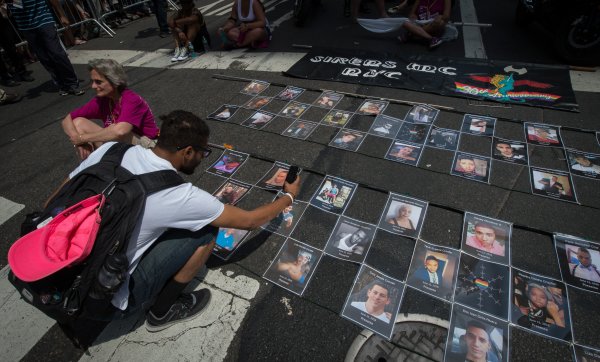