There has been a surge in racist attacks in the United Kingdom following Thursday’s referendum in which 52% of voters said they wanted to leave the European Union.

“There are very obvious links from the outcome of the result and people using it like a catalyst to say things like ‘we are out of Europe so you now can’t be here’ or ‘go back home'” says Gareth Cuerden, head of hate crimes in Wales for the charity Victim Support. He said his team has received over 60 reports of hate crimes and incidences in Wales, including from non-European racial groups.

U.K. Prime Minister David Cameron condemned the increase in racist abuse. He told the House of Commons on Monday that the government “will not tolerate intolerance” and he condemned “some of the incidents we have seen across the country over the weekend of intimidating migrants and telling them that they need to go home.”

The rise in racist attacks appears to be pegged to the belief that migrants will have to leave the U.K. following the referendum — in which the Leave campaign vowed to “take back control” of immigration. Cuerden notes that they saw a similar spike of hate crimes and incidences in Wales around last November’s Paris terrorist attacks. “When public figures, the press and everyone focuses on a story that is specific to a characteristic like race or religion we can expect an increase [in hate crimes]” says Cuerden. “We are expecting the same trend to come through with the E.U. referendum because there has been a big focus on race.”

London’s Metropolitan police confirmed on Sunday that they were looking into “allegedly racially motivated criminal damage” to the Polish Social and Cultural Association in west London, after graffiti was found on the front entrance. The Polish embassy released a statement on Monday, expressing alarm at the “recent incidences of xenophobic abuse” of the Polish community and other minority groups. In Wales, businesswoman Shazia Awan, who campaigned for the U.K to remain in the E.U. was told to “pack her bags and go home.”

It also emerged that cards saying “Leave the E.U. No more Polish vermin” were left outside homes and a school in Cambridgeshire — an area that has seen high-levels of E.U. immigration to work in its farming and packaging industries. Channel 4 correspondent Ciaran Jenkins said three people shouted “send them home” as he was reporting from the northern English town of Barnsley last Friday.

On social media, hundreds of anecdotes were shared of racist altercations including an elderly European woman told “get packing” on the bus, a Polish waitress being told by patrons she was “going home,” or another Polish resident being told go back “to their own country.”

Other minority groups in the country have experienced threats and taunts on their right to be in the U.K. On Twitter, Ali Abbasi said that a Sikh colleague was told by a patient: “shouldn’t you be on a plane back to Pakistan? we voted you out.” While another Twitter user reported that men shouted “out, out, out” at a Muslim woman in South London, telling her: “this is England we’re white, get out of my country.”

The spokesperson for the Muslim Council Miqdaad Versi, who has been collating online reports of hate incidences and crimes, told TIME that he has seen a rise in bigotry following the referendum results where “a mixture of different communities” have been attacked for not being of white British heritage.

In an interview with Sky, the former chairwoman of the Conservative Party Baroness Warsi said that it is time for Leave campaigners “to come out and say that the campaigning was divisive and was xenophobic and give a commitment that future campaigning and the way that they intend to run this country will be united, will make people from all backgrounds feel like they belong.”

London Mayor Sadiq Khan has put the the capital’s police on alert for racially motivated incidents. “It’s really important we stand guard against any rise in hate crimes or abuse by those who might use last week’s referendum as cover to seek to divide us,” he told the Guardian. 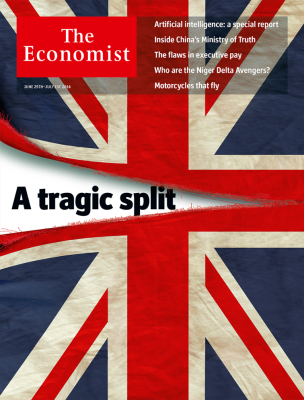 These Are the Media's Best Brexit Covers
Next Up: Editor's Pick