How the Supreme Court Decision on Immigration Will Affect 3 Families

Gerson Quinteron of Washington, yells during a demonstration on immigration at the Supreme Court in Washington on June 23, 2016.
Evan Vucci—AP
By Maya Rhodan

When Ezzie Dominguez heard about the Supreme Court’s recent decision on immigration, her first thought was how to tell her husband.

Dominguez was born in Guanajuato, Mexico, but she became an American citizen shortly after immigrating in 1993. Her husband, however, is not a citizen. When President Obama announced a plan in 2014 to provide temporary legal status to undocumented immigrants who are the parents of U.S. citizens, they applied. But on Thursday, she was devastated to learn that the court had issued a 4-4 decision that left the program on hold. Her husband hadn’t yet heard.

“I didn’t know how to tell him that one hope that we had thought we’d have was no longer available,” she said, with strong emotion in her voice. “Hearing that decision from the court, it hit me really hard. I completely lost my trust in the government.”

Immigration policy in the U.S. is now in limbo. It’s been stalled in Congress since 2013, and the court decision has put two programs initiated by executive action from President Obama on hold. The future of the policy will likely be determined by the outcome of the presidential election and a handful of Senate races this fall.

In the meantime, families like the Dominguezes are grasping for a way forward.

“We had trust that the Supreme Court would make the right decision. The Supreme Court was our final hope,” Dominguez, 33, said in a call with TIME on Friday. “America is my mother. For me, it’s heartbreaking to know that mother doesn’t treat all of her children equally.”

Dominguez’s troubles with immigration started in 2011, when she was pulled over for driving through a stop sign in her hometown of Denver. The officer asked to see her “papers,” and she showed him her car registration and license. Then, she recalls, he asked her husband, Jesus, for his papers. He ended up being taken to jail and, later, an immigration detention center.

“It became real,” she says, her voice cracking with emotion. “All this time we were living a life just being a happy family. It just crumbled right before us.” At the time, Jesus was in the process of applying for citizenship. Since she and their child, George, were Americans she figured the process would be easier than it proved. When President Obama signed an executive order allowing undocumented parents of U.S. citizens to defer deportation, their hope grew.

But, they’ve faced difficulties. And without the president’s plan, she and her husband will have to go back to square one on the immigration process. Her husband works as both a cook and a dishwasher at two restaurants in the Denver area, but only makes a little over minimum wage. Because he’s undocumented, she says, he has to work “extra hard”—without a work permit or Social Security card, he has no access to health care or vacation days or even job security. Citizenship would change that.

Dominguez’s family is like many the president hoped would benefit from the plan he announced in 2014 that would have temporarily shielded as many as 5 million undocumented immigrants from deportation. Under the plan, illegal immigrants who were brought to the country as children and undocumented parents of permanent residents or legal citizens would have been granted special legal status if they met certain criteria. The president also sought to reprioritize deportation actions to remove “felons, not families. Criminals, not children” first.

The backlash against the action was swift. Twenty six states, led by Texas, filed a lawsuit against the president’s executive action. According to the Pew Research Center those states were home to 46% of the immigrants who would qualify under the updated action. A federal court later sided with the states and blocked the president’s plan. Many, like Lydia Nakiberu, who is a DAPA-eligible mother of three, had looked to the Supreme Court for hope. Now, she tells TIME, her children are living in fear that she and her husband will be taken away.

“We always have to tell them to have faith,” Nakiberu says. “To have faith in God and trust God. And I always tell them that we will win because we won’t stop fighting.”

Nakiberu says her children, ages 9, 8 and 4, have already experienced what it’s like to have a parent taken away. In 2012, her husband was taken to a detention center after being picked up from their home. She says, he was there for three months and was released after a lawyer and community groups intervened.

Ana Cañenguez, whose response were translated from Spanish by Roxana Bendezu of the National Domestic Workers Alliance and We Belong Together, says when the Supreme Court decision came down she was “in tears.”

“We were almost certain that today would be the day when the judges would announce their vote and wanted to wait for, what we thought was, a favorable response as a family,” she says. Had the Supreme Court decided in their favor, she says, it would have been a time for celebration. “Celebrate the end of a very sad episode in our lives, of so much suffering and the beginning of a better future for myself, my children, my small grandchildren, my whole family all together without the fear of being separate,” she says.

In remarks on Thursday, President Obama called the Supreme Court decision “heartbreaking for the millions of immigrants who’ve made their lives here,” and said the November election should be a referendum on immigration reform.

“Now we’ve got a choice about who we’re going to be as a country, what we want to teach our kids, and how we want to be represented in Congress and in the White House,” he said.

Dominguez, whose interactions with the immigration system led her to become an activist—she now works as an organizer for the Colorado Immigrant Rights Coalition— agrees saying that this has reminded her of the importance of voting.

“We’ve seen such hateful rhetoric right now towards immigrants, and i think that has to do with the fact that people don’t understand where we’re coming from, she says. “We are people of good. We are here to work and we work hard.” 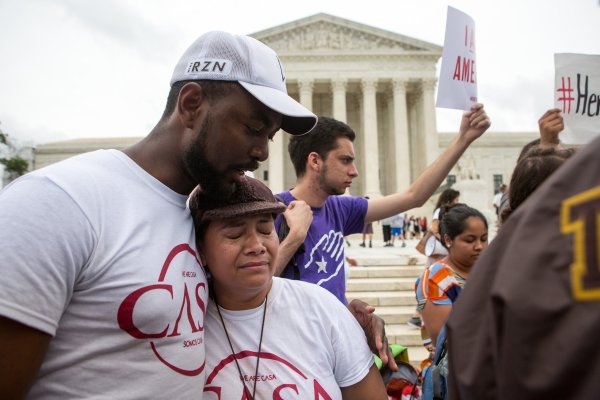