Supporters of Podemos (We Can) leader Pablo Iglesias and Izquierda Unida (United Left) leader Alberto Garzon, now running together in the coalition Unidos Podemos (Together We Can), attend to a campaign rally for Spain's upcoming general election in Jerez de la Frontera, Spain, June 23, 2016.
Jon Nasch—REUTERS
By Amanda Calvo

Spaniards will head to the polls once again on Sunday after an inconclusive national election last December plunged the country into a six-month political deadlock marked by failed coalition talks.

Although the last elections left no group with an outright majority, Spain’s ruling conservative Partido Popular (PP) snagged the most parliamentary seats followed by the Socialist Party (PSOE). However, voters welcomed upstart parties to the political stage, with the far-left Podemos (“We Can”) party following tightly behind and the centrist Ciudadanos (“Citizens”) trailing in fourth place.

Polls say the upcoming elections will likely deliver again splintered results. Here’s the lowdown on what is at stake.

Spanish parties appear to be riding a wave of discontent among voters, much like those in Spain’s southern European neighbors, where the rise of anti-establishment parties like Greece’s Syriza and Italy’s Five-Star movement has been fueled by economic stagnation and corruption. In Spain, economic scandal, coupled with a high 20% jobless rate, and slashed public spending, have soured voters.

The conservative PP is forecast to win these polls, meaning that it must either form an uneasy alliance with the Socialists or resign itself to the impossibility of forming a majority in parliament. Other party combinations could very well be a possibility but would require at least three parties in a coalition, which has proven too much for party leaders refusing to budge on big issues over the last six months. There may be some hope in Podemos leader, Pablo Iglesias, who hinted on Monday that he would be open to easing his stance on secession-inclined Catalonia’s right to a referendum on independence if it meant a national government could be formed.

After decades of back and forth rule under the PP and the Socialists, the elections have at least confirmed one thing: an end to the traditional two-party system. “Although we expect to see another fragmented parliament, the two-party system era is largely gone and it doesn’t look like it’s going to come back anytime soon,” Antonio Barroso, an analyst with the Teneo Intelligence political risk consultancy, told TIME.

The Podemos movement rose out of the anti-austerity “Indignados” protests that saw thousands flock to Spain’s streets in 2011 and inspired Occupy Wall Street protests in New York and demonstrations across Europe. Podemos became official in 2014 and has shaken up Spanish politics.

Led by Iglesias, a 35-year-old denim-clad political science professor with a ponytail, the party brokered a recent coalition with the small communist-led United Left (IU) party and is now referred to as Unidos Podemos (“Together We Can”).

Their joint ticket is on track to win more votes than the Socialists according to Electomanía, possibly leapfrogging over Spain’s longstanding centre-left party into second place. If so, they are a serious contender to form a coalition government leaving the Socialists with the existential question of either joining a new left-wing coalition with Podemos, or joining a centrist alliance lead by the PP of the like seen in Germany.

Spain is not on its own regarding political uncertainty. Europe has seen better days, beset as it is by a debt and refugee crisis as well as growing dissatisfaction with E.U. policies culminating in Britain voting yes to going at it alone on Thursday (a decision that will likely hit hard Spain’s economy). But nonetheless Madrid cannot afford to remain politically deadlocked, with its public debt reaching record levels in this year’s first quarter and the European Commission’s patience waning as it expects the next government to tackle the budget deficit.

This means that parties will have to navigate the unchartered waters of compromise — something alien to the Spanish political scene.

The repeat election is a first for Spain since its transition to democracy but possibly not its last. If parties are not able to bridge their differences and cooperate, Spain is doomed to a long, hot summer of political tension or, even worse, another election. 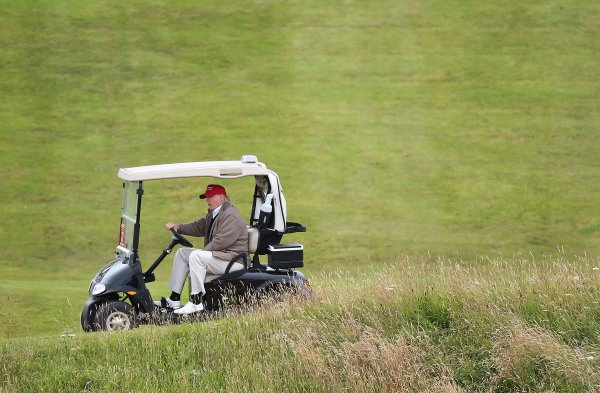 Donald Trump Says Brits 'Took Back Control of Their Country'
Next Up: Editor's Pick