Votes are sorted into Remain, Leave and Doubtful trays as ballots are counted during the E.U. Referendum count for Westminster and the City of London at the Lindley Hall, Royal Horticultural Halls, London, on June 24, 2016.
Anthony Devlin—PA Wire/Press Association Images/AP
By Simon Lewis

Britain’s leading broadcasters, the BBC, ITV and Sky News, have all declared that the Leave campaign is projected to win the referendum on the country’s European Union membership.

In the early hours Friday, the BBC said it forecasts that when all votes are counted, the majority of the U.K. will have voted to leave, by a surprisingly large margin of 52% to 48%. ITV News also predicted a Leave win, with Sky News projecting the same result.

Last minute polls suggested the country would decide to remain in the 28-member bloc. But as results trickled in, it emerged a Leave vote was likely, and the British currency, the sterling, took a dramatic dive to its lowest level in relation to the dollar in more than 30 years.

The expected result puts pressure on Prime Minister David Cameron, who called the referendum but campaigned for Remain. 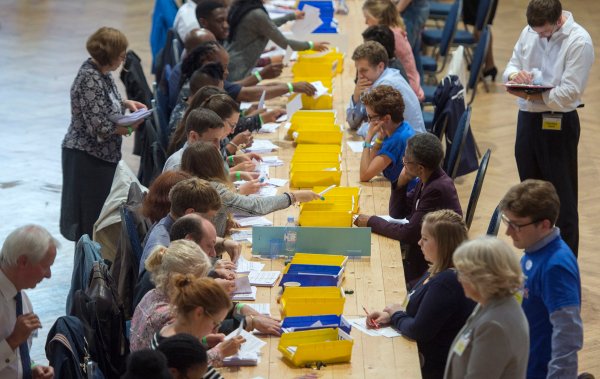 Brexit Vote on Knife's Edge
Next Up: Editor's Pick