This week, we interviewed Winona Ryder about her new Netflix thriller Stranger Things, out July 15. During the conversation, she discussed her nostalgia-fueled comeback, the emotional toll that young fame took on her and the recent allegations of domestic abuse levied against her onetime fiancé Johnny Depp.

The first episodes, I’m just a wreck. And I’m sort of old school in my approach to acting. Like, if I have to cry, I have to really cry. I’m allergic to this thing they use [to help actors cry] if you literally run out of tears….I really have to go there mentally. Usually on a film there’s a couple of scenes, but this was my first time doing eight episodes of something, and let me tell you, crying all day—wow.

This is a different kind of role for you.

I don’t know if I could have done this show if it had been about pedophilia or serial killers. I love The Fall and The Killing was a great show, but that’s just so heavy.

You know how they approached me was that they really wanted to make this this love letter to the movies they watched when they were growing up. They’re in their mid-thirties, so they grew up with these films like Stand by Me, E.T. and Close Encounters. I know nostalgia has come back a lot.

Nostalgia is a thing now.

Yes, nostalgia is a thing now. That’s the perfect—I hear people asking, is that a thing now? And it’s interesting because it being set in 1983, and I remember that year. It was a more innocent time. Well, yes and no. It was the Reagan administration. I remember being in school when Reagan made ketchup a vegetable, because you would get the tater tots and the fish sticks, and then ketchup as your vegetable. And there was obviously corruption and government conspiracies going on, which I’m a believer in, I guess you could say.

I’m just highly suspicious. Maybe it was just the house I grew up in. It’s weird. The government actually came up with the phrase “conspiracy theory,” so it would sound like just a theory during the Pentagon Papers. My parents were very active in the ’60s. It’s pretty common knowledge what was going on.

I remember when Occupy Wall Street happened, and my dad went down there, and they were taking videos just like they used to—the thing that Hoover did. There’s a great documentary on Netflix called 1971 about this group that was never caught that broke into an FBI thing who released all these papers, and it was literally, “Spy on this woman’s group at this college,” really crazy, and “take photographs.” And they were doing that with Occupy Wall Street. There were people in there that were planted taking photos.

In my household, we were raised not to believe the mainstream press. But you don’t want to just listen to one source. And it’s still that way I feel. It’s just been such a hard couple of weeks, when Orlando happened, you go to CNN because you know that CNN is the most level-headed and it’s like Terror Alert in these huge letters—it’s hard to get a more neutral take. But now with the Internet—I do wonder sometimes if part of me didn’t want to have kids because it’s such a crazy world. You really can’t control what they see.

Do you feel like you’ve been caught up Hollywood’s embrace of nostalgia?

Not intentionally. It’s been certainly pointed out to me, and it’s really interesting….I get asked a lot, ‘What does it feel like to be a ’90s icon?’ And I’m like, ‘You think I sit around and think of myself like that?’ You can’t think about yourself in those ways, because who does that?

I did feel like it was a little bit of a struggle because when you achieve a lot of success when you’re that age, in your late teens and early 20s, it was then harder to play roles when I was a little bit older that I was the right age for. People just thought of me as this person from Reality Bites, or whatever. My thirties were a little bit tough, for various reasons. But I do remember work-wise, people thought of me as the ingénue. But I was too old for that.

I know there’s a lot of conversations right now about ageism, and I know a lot of actresses who have a tough time, and I’ve gotten offered those mom parts. But you can make something of it. For me, I’m finally getting to play my own age, and it’s liberating. I would not want to go back to playing the ingénue. I’m not someone like Norma Desmond who’s harking back to her younger days.

I think because I started so young, I secretly wanted to be older all the time.

For a lot of other reasons, now it feels like there’s been a shift in my life, possibly because of my age and a sense of liberation about being able to play my age. I do also feel like now it’s other people’s time, and that makes me happy.

I did this little movie I really love called Experimenter, but that took six years to get made and no money. These days, it’s either a small movie made with no money over the course of six years or the superhero movie—which, I don’t know, I can’t really envision myself in a cape getting chucked out of a window. They would never make Girl, Interrupted today, those sort of medium budget films. Maybe it would be made on TV.

Do you feel like you appreciated your career, the movies you got to do in your teens and twenties, at the time?

There were times where people might have seen me and said, “Wow, she’s so lucky.” But I was depressed, I was going through something. That time I went through led me to make Girl, Interrupted. Most girls go through that at around that age—20, 21. It’s much more common than we think, which is why I wanted to make that movie. It worked in the sense that I still have girls come up to me and say that it really helped them, and that was nice to hear.

My editor would kill me if I had you here and didn’t ask you about the recent allegations of domestic abuse against Johnny Depp.

Look, I mean, obviously I can only speak from my own experience. It’s very tricky because if it were any other type of scandal, like cheating, you could be like, ‘None of my business. No comment. Not appropriate for me.’ But I think because what is being said is so horrific and such a global issue for millions of women, obviously, that I understand why people feel it is their business. I get it. And I get why you would ask.

I can only speak from my own experience, which was wildly different than what is being said. I mean, he was never, never that way towards me. Never abusive at all towards me. I only know him as a really good, loving, caring guy who is very, very protective of the people that he loves. It’s hard because I feel like—that’s my experience. And it’s been a very long time.

I don’t know how you feel about it, but it’s like anybody who says anything about it is a victim-blamer. I wasn’t there. I don’t know what happened. I’m not calling anyone a liar. I’m just saying, it’s difficult and upsetting for me to wrap my head around it. Look, it was a long time ago, but we were together for four years, and it was a big relationship for me. And we have a lot of mutual friends. I just never heard anything like that about him. But, again, I feel like even saying that, I’m going to get death threats or something. I’m not on social media, so maybe I will be spared.

But yes, it’s really hard. I don’t know what your love history is, but imagine someone you were in a relationship with was accused of this. I get that there are patterns of abuse. I get why you’re asking me. But it’s weird because imagine if someone you dated when you were—I was 17 when I met him—was accused of that. It’s just shocking. I have never seen him be violent toward a person before.

It’s just hard to picture. The only word I can come up with is unimaginable. You know with certain people you hear something and go, “I can see that.” But this isn’t that. So anyway this is the first time I’ve said anything so I don’t know. I can only offer my own experience. It’s such a serious, horrible thing to be accused of.

It’s almost as if your brother or someone you just never—so, you know, there’s a part of me that is thinking, ‘Is it even appropriate for me to say anything?’ But because of the seriousness of it, it’s been brought into a thing where it’s trickier for me to say, ‘None of my business.’ But that’s all I have to offer is my own experience, which was a very, very long time ago. 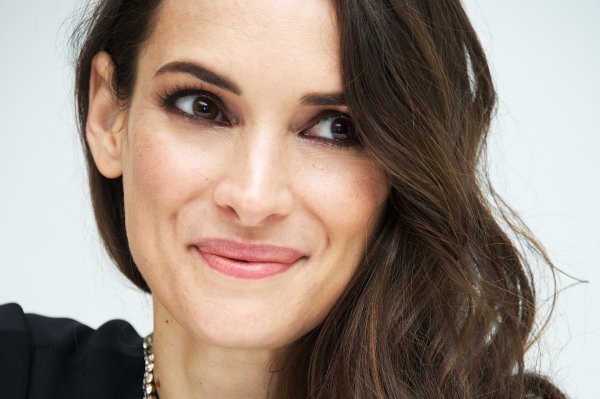 '90s Icon Winona Ryder Is Making Her Comeback
Next Up: Editor's Pick