House Sit-In Followed Decades of Debate Over Video in Congress

Facebook Live video of Rep. Ann McLane Kuster, a Democrat from New Hampshire, is broadcast on C-SPAN during a House Democratic sit-in on gun legislation in the U.S. Capitol in Washington, D.C., on June 23.
Andrew Harrer—Bloomberg/Getty Images
By Katie Reilly

Most of the broadcast coverage of the sit-in staged by House Democrats this Wednesday and Thursday came directly from representatives themselves, many of whom used social media to post photos and livestream video of their push for gun legislation. Those livestreams even ended up on C-SPAN, the network that has for decades broadcasted political proceedings, after House Republicans cut the camera feed typically used by the network.

Although that move sparked criticism from many who wanted to watch the sit-in, it fell within House rules—and those rules have been used by Democrats and Republicans alike.

The way it works is that the Speaker of the House—currently Republican Paul Ryan—controls the system for broadcasting House floor proceedings. C-SPAN Communications Director Howard Mortman told TIME that over the years, House and Senate leaders in both parties have repeatedly denied the network’s requests to use its own cameras in the chambers. House rules also prevent people on the floor from taking pictures, recording video or using “a mobile electronic device that impairs decorum.” House Democrats technically broke those rules during the sit-in.

“What you’re seeing today is brand new. It’s kind of unprecedented to show this sustained amount of video basically nonstop from when [the sit-in] began,” Mortman said on Thursday. “We’ve been showing video from the floor in ways that were unimaginable even months ago.”

The diversity of video offered by social-media tools like Facebook Live and Periscope compensated, he added, for any deficit in video quality.

There’s perhaps no better way to see the role those tools can play than by comparing this week’s events to those of 2008, when House Republicans staged a similar protest to push for a vote on offshore oil drilling after Democratic House Speaker Nancy Pelosi adjourned the House and cut the broadcast feed. That protest preceded the advancements in social media that aided Democrats this week. Back then, Republican Rep. John Culberson, from Texas, shared information about the developing protest on Twitter, and C-SPAN broadcast the more limited video streamed by Culberson through Qik, which has since shut down.

“Here is a powerful use of social media – when they turn off the mike we can still communicate,” Culberson posted on Twitter during the 2008 protest, hailing the moment as “the dawn of real time democracy through real time representatives.”

“Retweet these messages – these are the only words being broadcast from the House floor today,” he said.

Alas, Twitter—founded in 2006—was still relatively new, and most of Culberson’s tweets garnered no retweets and just a handful of likes.

Robert Browning, executive director of C-SPAN archives, recalled that Culberson’s video couldn’t easily be transmitted during the sessions. “The technology was not as robust back then,” Browning said in an interview with TIME on Thursday, and the lack of video hampered the story’s ability to spread. House Republicans, he added, relied instead on press conferences given after the fact.

But 2008 was hardly the beginning of the debate over video access in Congress. The issue predates C-SPAN, which began its regular live broadcasts of the House floor on March 19, 1979. The first live television broadcast of a congressional proceeding took place on Jan. 3, 1947 for the opening of the 80th Congress and was used only occasionally thereafter. Cameras were later banned from regular floor sessions and committee hearings in 1952, after debates over which floor proceedings should be broadcast, who would have the authority to make that decision and who would control the cameras. According to the House Office of the Historian, there was also concern about how “working under the gaze of the cameras” might impact representatives. (Browning has another theory: “They didn’t want members to be seen not paying attention, reading newspapers.”)

Like so much else in America, the rules about video were changed by Watergate. The House authorized broadcast coverage of floor debates ahead of potential impeachment proceedings against President Richard Nixon. In the wave of pro-transparency feeling that followed, some representatives advocated for live coverage as something that would benefit democracy.

But, even as video became more accepted, questions remained about what its purpose would be. Some leaders in Congress have argued that the official cameras are only there to provide a video record of what is said while the House is in session, Browning said. That would mean that any additional political drama—including spontaneous sit-ins—was never intended to be included. 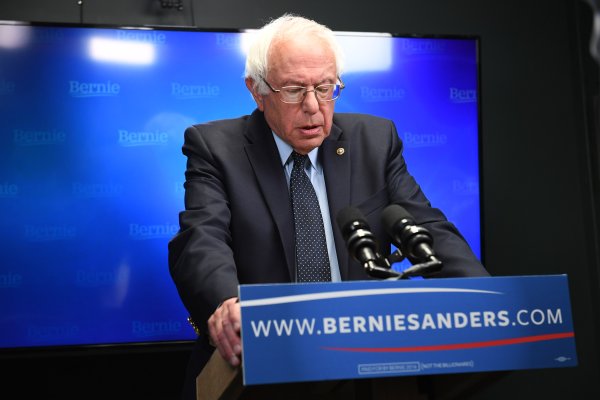 Bernie Sanders Could Destroy His Own Revolution
Next Up: Editor's Pick