Obama Administration Will Do More to Help People Leaving Prison

The Obama administration is taking more steps to help people leaving the prison system transition back into society. On Friday, the Departments of Labor, Justice, and Education will announce new grant funding to programs aimed at helping former inmates get jobs and get an education. The secretaries of each agency will speak at an event hosted by the liberal Center of American Progress on Friday.

“The bottom line is that we are less safe when the stigma of incarceration prevents americans from truly ever shedding their prison jumpsuits,” said White House Senior Advisor Valerie Jarrett on a press call previewing the announcement. Which is why she says the administration is “supporting initiatives to allow formerly incarcerated individuals to enjoy the second chance they deserve.”

Those initiatives include 67 two and four-year institutions that have agreed to enroll 12,000 people incarcerated in either state or federal prisons in both educational and training programs. According to a White House Fact Sheet, people in prison are 43% less likely to return if they participated in an educational program, which in turn, saves the prison system money.

The institutions were selected via the Second Chance Pilot Program, which circumvents a Congressional ban on using Pell Grant funds for prisoners. U.S. Education Secretary John King said Thursday the administration is using its “experimental authority” to implement the pilot program that stirred a bit of controversy when it was announced last summer. A group of House Republicans introduced the “Kids Before Cons Act” to block the Department of Education from implementing the pilot program; the bill is still in committee.

“Having an inmate receive Pell grants doesn’t take a nickel from anybody else,” former Education Secretary Arne Duncan told the Atlantic last year. “This never pits one group over another, and it’s not robbing Peter to pay Paul. It’s just trying to have a few more people have access to what could be a life-chance-forming opportunity.”The schools will begin offering classroom-based instruction, online education, or both at 141 corrections facilities across the U.S.

The Department of Labor is also distributing over $30 million in grant funding to programs and organizations, from GoodWill to labor unions, to provide jobs and job training to people in high poverty areas, formerly incarcerated individuals, as well as high risk youth. The Department of Housing and Urban Development is also awarding 7 organization $8.7 million to address housing issues.

The initiatives announced Friday build on efforts the Obama administration has been undertaking while criminal justice reform packages stall in the U.S. Congress. Bills in both the House and Senate addressing mandatory minimum sentences and other issues facing the criminal system. “What we would like to do is see those bills move forward as quickly as possible,” Jarrett said Thursday. “There is a great cross-section of stakeholders who are supportive of it so there’s really no reason why it wouldn’t move forward right away.”

In the coming weeks, the administration expects to roll out more efforts and host more summits including one aimed at sharing the stories of children of people in prison and efforts to help the youth of Baltimore. 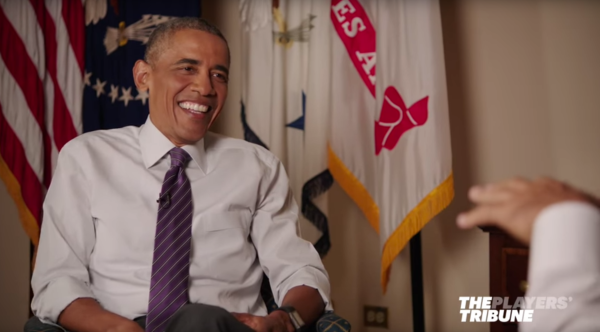 Watch President Obama Tease Derek Jeter About His Retirement
Next Up: Editor's Pick