My Daughter Came Out, Then Orlando Happened

How liberal is my Brooklyn neighborhood? Let’s put it this way: I was at a rock concert in the park this past weekend, and vendors were selling combos of parsley fries and kale salad. The local NPR station is the media partner for this music series because, as one of the hosts said on Saturday, “This is a really big ZIP code for us.” When we left, there was a huge line for the “bike valet.”

Park Slope, as this part of Brooklyn is called, is widely and often justifiably mocked for its elite leftiness and entitled children. Breast-feeding moms are known to take over entire taverns in the afternoons with their expensive strollers and rampaging toddlers. There are notorious online spats like the one after someone posted about finding a “blue boy’s hat.” How dare they assume it was a boy’s! (I say this as a mother who spent years rolling around these streets wearing clogs and feeding my kids a snack called Veggie Booty.)

Even the people who live here make fun of the neighborhood. But since the mass shooting at a gay nightclub in Orlando, I’ve thought a lot about what it’s meant for my kids to grow up here. I don’t think they’ve ever been in a class without gay parents in the mix. We parents–gay, straight, bicultural, biracial–have all bumped along together over the past 15 years from preschool to high school navigating the ordinary tragedies: divorce, layoffs, a mom with cancer. And the joys, of course, too: the middle-school productions of Macbeth, the holiday concerts where the kids dance down the aisles. This was our life.

So last fall, when my older daughter called me from college to say she was now quite certain that she was gay, I think I underreacted. It wasn’t entirely a surprise. And I didn’t want to make a big deal about it. So I asked if she was dating and how that was, and then we talked about the bus schedule home for Thanksgiving. Since then I’ve met her supertalented girlfriend, a student in Manhattan, and her girlfriend’s mom, and it has felt so ordinary. At least it did until June 12, when 49 people were gunned down at a club called Pulse.

I wept watching photos of the dead stack up on the TV screen. There were so many of them, and they were so young. But while I fumed about the availability of the semiautomatic weapon of war the killer used, my daughter saw it first as an attack on the LGBT community, a hate crime. I agreed with her. But it wasn’t until she said, “We’re not safe really anywhere,” that I really understood what that we meant to her. This wasn’t just about whom she dates but about who she is. She saw herself in those faces. It took me a little longer.

After a few days of constant Orlando coverage, my daughter asked me to turn off the news. The horror of it all was too much. It’s not as if my kids have been sheltered from the country’s painful history of hate crimes. High school students in Brooklyn stage productions of plays like The Laramie Project, which is about the 1998 murder of Matthew Shepard, a gay student at the University of Wyoming. Shepard was killed just a year after my girl was born, a long time ago for a 19-year-old. But this was a massacre, and it was happening now. And if it could happen in Orlando, a city with a vibrant gay population, like Park Slope, it could happen anywhere.

My daughter says she still can’t stop thinking about the mother who went dancing with her son at Pulse and died protecting him. It was Latin night, and 49-year-old Brenda Lee Marquez McCool loved to salsa. When the murderer turned his gun toward her and her son Isaiah, she told her child to get down, and then she stood in front of him. I told my child that I’d have done the same thing. Of course I would. But the idea that she might ever need me to protect her, simply because she was dancing with her girlfriend, is something that I’m ashamed to admit I hadn’t even contemplated.

I think about it now, however. On June 26, I’m going to New York City’s Pride Week march with my daughter and her girlfriend. It’s always a big event, but this year officials are expecting a massive turnout. The police say their antiterrorism forces will keep everyone safe. We’re counting on it. 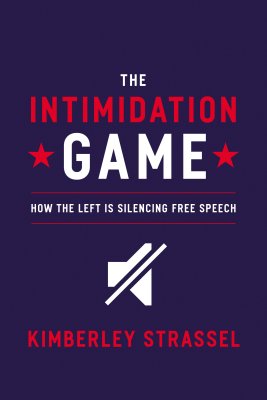 The Liberal Hypocrisy of 'Free Speech'
Next Up: Editor's Pick