Can We Curb Gun Violence by Treating It Like a Disease?

Groups in more than 20 major U.S. cities are trying to stop hurt people from hurting others
Ron Chapple—Getty Images
By Josh Sanburn

In 2014, a week before Thanksgiving, a 56-year-old man was shot in the Crown Heights neighborhood of Brooklyn. Within hours, several of his family members gathered at the crime scene, discussing retribution. They had suffered; now, they wanted others to pay for their pain.

That’s when David Gaskin showed up. He gently probed the family, asking how they were feeling and why they might retaliate. He offered sympathy and counsel, informed by his experiences in prison and as a former gang member. And he repeatedly asked for verbal commitments that they wouldn’t strike back, at least not then. Some agreed–and he promised to follow up.

Gaskin, 34, isn’t a police officer or a psychologist; he’s an outreach worker for a nonprofit initiative, Save Our Streets (SOS). But he and others like him may well be instrumental in curbing America’s gun-violence epidemic on a local level, especially as Congress keeps declining to pass federal gun control.

The key is their unorthodox approach. Unlike cops, who arrest criminals, or coalitions, which raise money to change laws, programs like SOS–now in Oakland, Calif., New Orleans and at least 20 other major U.S. cities–approach gun violence like doctors approach disease: as a contagious bug that must be diagnosed, contained and treated. “Hurt people hurt people,” explains Yvette Simpson, who is spearheading an SOS-like initiative in Cincinnati. And at a time when the American Medical Association (AMA) is calling gun violence a public health crisis, these groups say it’s paramount to manage that pain. It just might prevent the next local shooting, or even the next Orlando.

The idea that violence can be “cured” originated in the 1990s, when Gary Slutkin, an epidemiologist, moved to Chicago. He soon realized that the city’s crime rates spiked in geographic clusters, like the viruses he had treated in Somalia and Uganda, and that those who experience violence have a greater likelihood of committing it, meaning it’s contagious. (Per one recent study, people exposed to violent behavior as children or adolescents were 31.5 times more likely to engage in chronic violent behavior as adults than those who were not.)

So in 2000, Slutkin started CeaseFire, a group that tapped people with connections to high-crime areas, like Gaskin, to serve as “violence interrupters.” After receiving tips from community members, they reached out to people who had experienced a violent episode, mediated ongoing conflicts and worked with high-risk residents to change their behavior–much in the way doctors treat outbreaks of tuberculosis and cholera.

It worked. Within a year, Slutkin’s approach led to a 67% decrease in shootings in one of Chicago’s most violent areas. Since then, “cure violence” initiatives, funded by a mix of city, state, federal and private money, have led to similar results in other cities–notably in four high-crime Baltimore neighborhoods, where there were as many as 56% fewer murders and 44% fewer shootings from 2007 (when the first program began) to 2010.

There are drawbacks to the cure-violence approach, though. For one thing, its efficacy is limited by the fact that Congress hasn’t funded gun-violence research since 1996, thanks in part to pressure from the National Rifle Association. “We’re just sticking our heads in the sand,” says Andrew Gurman, president of the AMA, of the gridlock. Chicago police have also criticized CeaseFire staff for not sharing information or involving them enough in the process, and said some outreach workers were getting into trouble. That led Mayor Rahm Emanuel to slash the program’s budget in 2013.

Still, in Crown Heights, which has seen gun violence drop significantly since SOS began in 2009, program head Amy Ellenbogen argues that it’s an asset to have more than one entity working to end violence, especially gun violence. “It is a social problem that has so many root causes,” she says. Simpson, of Cincinnati, agrees. “Law enforcement is part of” the solution, she says, but it takes more than police work “to prevent somebody from shooting a gun.” 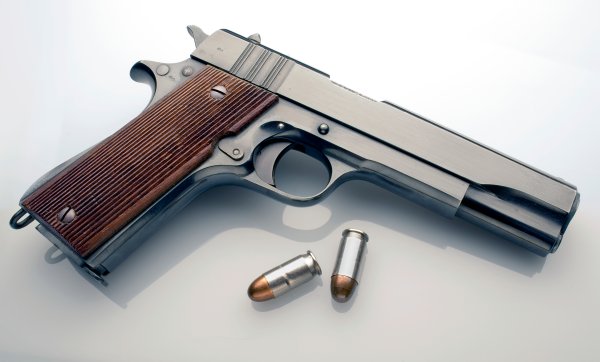 How in Touch Are You With America on Gun Control?
Next Up: Editor's Pick