In Sports and More, Moscow Is Bending the Rules to Get Ahead

On June 17, a few days after Russian soccer fans began running riot at the European championships in France, Vladimir Putin was asked to comment on his countrymen’s behavior. With a half-smile, the Russian President played dumb. “I truly don’t understand how 200 of our fans could beat up several thousand English,” he told audience members at an economic forum in St. Petersburg, where they responded with laughs and applause.

His point was rhetorical. With enough savagery, weaponry and calculation, it is easy to imagine how a few dozen Russian soccer hooligans could rout a far bigger group of rivals who hadn’t expected a militarized brawl. This, according to French authorities, is exactly what happened. Dozens of Russian fans were arrested and deported as a result. Three have been sentenced to prison terms in France. Among the dozens who were injured, two British fans were left in comas.

In the days that followed, the European press was full of speculation that the Kremlin had approved of the violence or even orchestrated it. The evidence was thin, and Moscow denied any involvement. But what it couldn’t deny was the pride that these attacks inspired back home. One senior Russian lawmaker, Igor Lebedev, who also serves as deputy chairman of the Russian soccer federation, urged the hooligans on Twitter to “keep it up.” The phrase they chanted during the violence–Russkie Vperyod! (Forward, Russians!)–happens to be emblematic of the brand of throwback patriotism that emerged from Putin’s most recent run for re-election, in 2012.

Ahead of that vote, the Kremlin decided that the only way to galvanize a weary electorate was to play on the old fears and prejudices of the Cold War. It worked: Putin’s popularity rose along with animosity toward the West. Ever since, a series of crises in Russia’s relations with the West have helped the state’s powerful propaganda channels nurture a national siege mentality, portraying Russia as the victim of a bullying and treacherous West whose primary aim is to bring the country to its knees.

This campaign has also indicated that Russia’s moral compass is off course. A bit of treachery, if useful in outwitting a more powerful rival, has been portrayed as perfectly permissible, and the Kremlin has provided plenty of examples of its effectiveness. In Ukraine, Russian troops occupying the region of Crimea in 2014 simply took the markers off their uniforms and pretended to be local rebels. In Syria, Putin has claimed that his warplanes were bombing ISIS; in reality, they were often attacking U.S.-backed rebel groups in order to keep the regime of his ally Bashar Assad in power. As the Russian saying goes, “If you don’t get caught, you’re not a thief.”

The same seems to apply to the Russian world of sports. The Russian government allegedly ran a systematic doping program during the Winter Olympics in Sochi in 2014–when its athletes topped the medal count. Only this year, after numerous whistle-blowers and official investigations exposed the extent of the Olympic cheating, has Moscow admitted that it has a problem with athletes’ use of performance-enhancing drugs. The Kremlin still denies allegations of a state-run doping conspiracy, while Russia’s sports minister Vitaly Mutko has said the government is doing everything possible to keep athletes clean.

Nonetheless, on June 17, the world governing body of track and field decided to ban all Russian athletes from the Rio Games, a decision later backed up by the International Olympic Committee. Putin objected to the blanket ban. “If some of the members of your family have committed a crime,” he asked, “would it be fair to hold all the members of the family liable?”

Maybe not all of them. But the head of a family, like the head of a state, is morally liable for its corruption. And over the past few years, Putin’s actions have shown that Russia is willing to use dirty tricks and even violence to gain an edge over its enemies.

That doesn’t mean he ordered Russian athletes to cheat or Russian soccer fans to beat people up. But he did set the tone for a shrill campaign of anti-Western propaganda, one that has blurred the lines between patriotism and pugnacity, between fair play and the desire for victory at any cost. 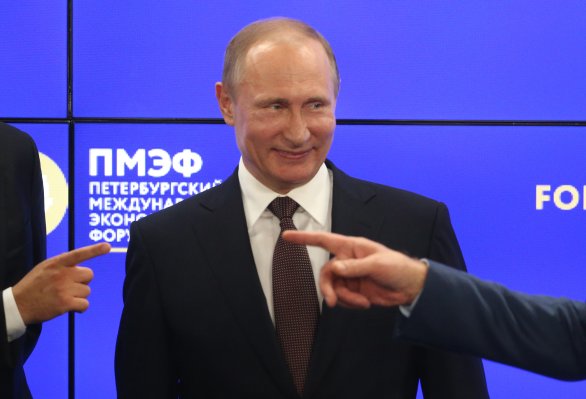 Putin Moderates Trump Praise, Says U.S. Is Only Superpower
Next Up: Editor's Pick