Britons are casting their votes on whether or not their country should leave the European Union, in a national referendum that could have profound consequences for the United Kingdom’s place in the world and for the health of the global economy.

Polling stations opened at 6am local time across England, Wales, Scotland and Northern Ireland. There were early reports of high turnout at some polling stations, but some concerns that storms in London and the southeast could dampen enthusiasm.

The race remains too close to call. Polling in recent days suggests the Remain campaign has recovered ground lost to the pro-Brexit camp since last week, when they held the advantage. YouGov’s eve-of-election poll put Remain ahead by 2%, with a 51-49 advantage. But another ITV poll found as many as 17% undecided.

Although the polls close at 10pm (5pm ET), broadcasters don’t feel there will be accurate enough data to give an exit poll. Instead, Britons must follow results as they come in overnight to get a sense of the outcome. A final result is not expected until early Friday morning.

The vote brings to an end a campaign that has been marked by sometimes bitter infighting within the ruling Conservative Party, and a nationwide debate on immigration levels — the issue that polls say most voters will base their vote on. Vote Leave has argued that Britain cannot hope to control immigration levels while it is subject to E.U. freedom of movement rules, which allow any E.U. citizen to live and work in the U.K. British Prime Minister David Cameron has said Britain can better control migration within the E.U.

The elderly voters streaming into the main polling station in Broadstairs, Kent knew which version they believed. Martin Taylor-Smith, the coordinator for the Leave campaign in that town and the surrounding district of Thanet, said he expects about 70% of voters to support his cause. “Around here my job is easy,” he says while greeting voters at the polling station. “The issue is simple – immigration, immigration, immigration.”

Considering that migrants account for only 1.2% of the population in this district, that may seem surprising. But this trend seems to hold across many of the U.K.’s coastal regions, where migrant numbers are generally low but antipathy toward outsiders runs high, says Samuel Armstrong, a staffer for the Conservative Party who has worked on campaigns around the country. “It doesn’t seem to make a lot of sense,” he says. “But it’s true.”

TIME joined Craig Mackinlay, local MP for the Conservative Party, as he canvassed voters and rallied support for the Leave campaign. “Here it’ll be overwhelmingly Out,” Mackinlay predicted while stuffing leaflets into mailboxes in a genteel part of town. Against a bright red background, the fliers declared: “Last chance to take back control.”

But it’s not just coastal areas where anti-E.U. sentiment is thriving. In the west London suburb of Southall, famed for its Asian community, voters appeared to back the U.K. leaving the E.U. Jalili Hanif, 18, who is studying auto engineering, said he was voting for the first time. “Young people seem to want to stay in the E.U. and all my friends are voting to stay. But lots of workers from the E.U. are taking more and more jobs in Britain,” he says. “They will keep coming and work for less. That means people like me will struggle to find jobs. The current system is unfair to young people who cannot find work. That is why I voted to leave.”

Many in the mostly immigrant community cited immigration as their main concern. Chopra Ramesh, 56, said: “I am an immigrant, I came to Britain from India in 1981. But things are getting worse and worse because we have all this cheap labour coming in from Europe preventing people here from finding work. That needs to change.”

Egyptian immigrant Sabinla Magou, 61, a mechanical engineer, said he valued the free movement offered by the E.U: “When I had an Arabic passport it was very difficult to move around. Then I got to Britain and became a citizen and I was free to go where I wanted. For me, the most important thing in a free society is free movement of the people, in Britain and Europe. That is why I think we should remain in the E.U. Young people seem to be voting to stay in Europe and that is their right. They want to travel and work around Europe. If we left the E.U. they would not have that access. Britain and Europe is my home, it is my children’s home, my grandchildren’s home, I want to stay in.” 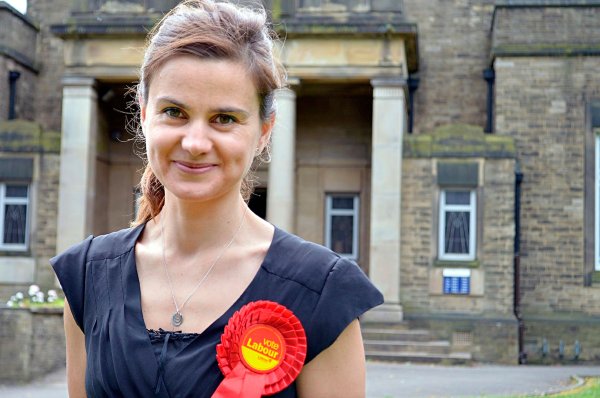 Jo Cox
Next Up: Editor's Pick