Sen. Elizabeth Warren (D-Mass.) raises her arms after addressing the American Constitution Society 2016 National Convention on June 9, 2016 in Washington, DC. The senator attended the gala dinner of the convention at the Capital Hilton.
Astrid Riecken—Getty Images
By Megan Lasher

Massachusetts Senator Elizabeth Warren is known for being outspoken on feminist issues. In recent debates over equal pay, gun control and Donald Trump, her 718,000 Twitter followers have relied on her blunt, factual arguments. And Warren is not one to take a break from politics: Even on her birthday, she joined in the fight for gun control legislation.

Here, 8 other times Warren proved she was a boss:

1. The time she wouldn’t apologize for being a woman

“The word’s out: I’m a woman, and I’m going to have trouble backing off on that. I am what I am. I’ll go out and talk to people about what’s happening to their families, and when I do that, I’m a mother. I’m a grandmother.”- The Daily Beast

2. The time she quoted Taylor Swift to explain how she responds to criticism

“As one of the great philosophers of our time has said, ‘Haters going to hate, hate, hate hate, hate, ‘” Warren said. “Knowing who you are helps you ‘Shake It Off.’” – Huffington Post

3.The time she re-defined what it means to be American

“Americans are fighters. We’re tough, resourceful and creative, and if we have the chance to fight on a level playing field, where everyone pays a fair share and everyone has a real shot, then no one – no one can stop us.” – YouTube

4. The time she gave some good advice to Suffolk grads

“You can’t predict it all. People will tell you to plan, to focus. They will tell you that if you want to succeed, you must stubbornly stay on your path no matter what. And they will be right. But they will also be wrong.”- Motto

5. (In a speech that was filled with good advice)

“Don’t be so focused in your plans that you are unwilling to consider the unexpected.”- also Motto

7. The time she told us to fight the good fight

“Change is hard. And if you don’t fight for it, you can’t win. But change can happen.” – her Facebook

8. The time she turned Equal Pay Day on its head 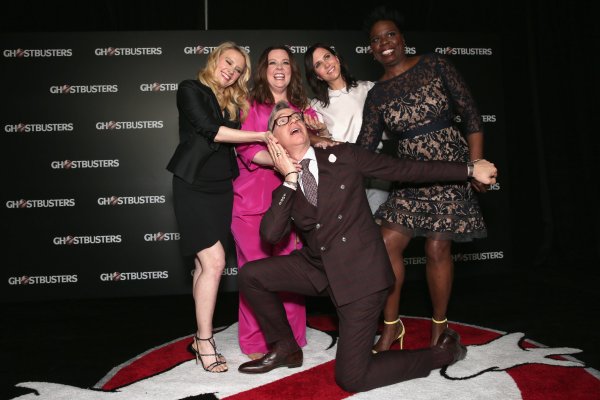 Ghostbusters Director Says 'Chick Flick' Is a 'Derogatory' Term
Next Up: Editor's Pick