Hillary Clinton met with House Democrats on Capitol Hill Wednesday, but it was a supposed member of her vice presidential short list who got all the attention.

The Clinton campaign had no comment on who she might be considering, while Becerra has repeatedly said he has no knowledge of whether he’s being vetted for the post.

But that didn’t stop his colleagues from teasing him. At a press conference after the closed-door meeting, Democratic Rep. Joseph Crowley of New York joked about how carefully Becerra poured water for Clinton and joking that he is near-sighted.

Still, Crowley made sure to express his confidence that Becerra would make a solid vice presidential pick and said he was happy with the qualifications of the pool of people being considered, who also reportedly include Democratic Sens. Elizabeth Warren, Tim Kaine and Sherrod Brown.

Clinton’s meeting with House Democrats lasted approximately 45 minutes. She did not speak with the press afterward, but lawmakers characterized it as a positive session.

“I don’t think there was a person in there that needed convincing. I think there were people there saying, let us know what you want us to do. There was a great deal of enthusiasm. You could feel the spirit in the air. We felt like family,” Becerra said. 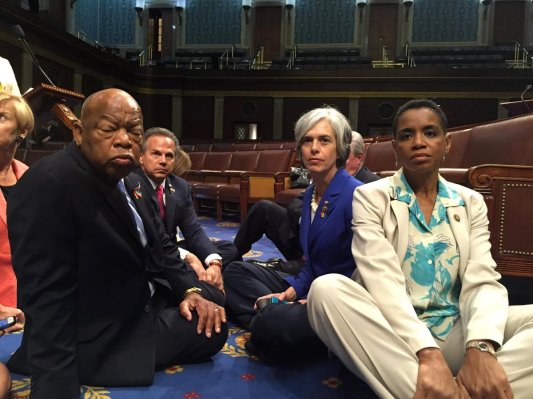