Why Some People in Scotland Really Hate Donald Trump

Donald Trump will be greeted by at least two Mexican flags, placed near his Aberdeenshire golf course in Scotland, when he visits the country later this week.

It’s a symbolic reminder of those he’s offended locally and internationally and a sign that the presumptive Republican U.S. presidential nominee should not expect a warm welcome after years-long contention surrounding the links, locals say.

“He’s notoriously disliked here,” said Stan Blackley, an Edinburgh resident who famously rubbed a yellow balloon on Trump’s head in 2012. “When he comes, we can almost feel the hair up the spine of Scotland stand up.”

Blackley, a 46-year-old environmental campaigner, is one of many who oppose the real estate tycoon’s presence in Scotland. Almost 600,000 people earlier this year signed a petition calling for Trump to be banned from entering the U.K. Many of the signatures came from Scotland, according to The Atlantic.

“To some extent, I’m worried about his visit. He’s a blatantly racist, sexist, misogynistic idiot,” said David Milne, who recently erected a Mexican flag on top of his house near Trump’s International Golf Links course. “We would be far happier without him being here.”

The 51-year-old has long been an enemy of Trump, and vice versa. (Trump called Milne a “loser” in a tweet in late 2012.) Milne has been a vocal critic of Trump and his developments after the mogul failed years ago to acquire his land and the homes of his neighbors on the Menie Estate.

The two Mexican flags fly to protest Trump’s arrival and the incendiary comments he made last year about Mexicans being “rapists” who bring crime and drugs to America, he said. “It was in solidarity with the Mexicans and now everyone else who has been threatened, harassed and intimated by this man,” Milne told TIME on Wednesday. “I basically just want him to be aware of the fact that we’re still here—another example that he has failed. He did not chase us off our land.”

One Mexican flag adorns Milne’s home while the other, put up by another major Trump detractor, stands 20 feet tall about 100 feet from the boundary of Trump’s links. Many locals support its statement, Blackley and Milne said. “Whether you’re anybody except Trump, he’s kind of said something dumb and horrible about you,” Blackley said. “It’s solidarity.”

Trump, whose campaign did not immediately return a request for comment, picked Scotland to build his golf course because he is half Scottish, he says on the International Golf Links’ website.

He plans to hold a ribbon-cutting ceremony for the rededication of the renovated Trump Turnberry golf course, south of Glasgow, on June 24 before he visits his Aberdeen golf course on Saturday.

But locals may not roll out the welcome mat. “I don’t think very many people want him here,” Milne said, adding that it’s “horrific” how far Trump has come in the U.S. election. “They’ve seen that he’s unacceptable—someone who has been pulled out of the dark ages, basically a prehistoric Neanderthal.” 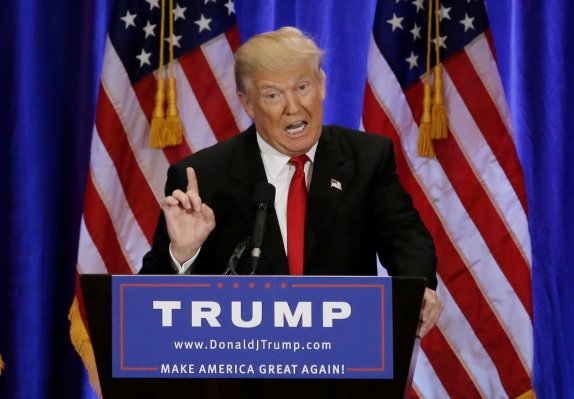 Donald Trump: Hillary Clinton Is Corrupt
Next Up: Editor's Pick