Judith Hill, a protégé of Prince who was one of only two other passengers on the chartered plane that made an emergency landing days before his death of an accidental drug overdose, has spoken out about the the fateful flight and its aftermath.

In an interview with the New York Times, Hill recalled talking to Prince over a late in-flight dinner in April when “his eyes fixed” and he suddenly lost consciousness. Had she not been looking in him, she said, she might have thought he had just nodded off.

Instead Hill summoned fellow passenger Kirk Johnson, Prince’s longtime friend and assistant, and the two tried unsuccessfully to rouse him. When they couldn’t, they notified the pilot, who called air traffic controllers in nearby Chicago. “We knew it was only a matter of time; we had to get down,” Hill told the Times. “We didn’t have anything on the plane to help him.”

The plane made an emergency landing in Moline, Illinois at 1:17 a.m., and Prince was revived on the tarmac with a shot of naloxone, a medication used to treat known or suspected opioid overdoses. He was taken to a hospital shortly afterward and continued on to his home outside Minneapolis the next morning.

Although Prince’s emergency landing was initially attributed to the flu, in hindsight it appeared to mark an ominous chapter in his little-known struggle with pain pills. He died of an accidental fentanyl overdose six days later, on April 21.

Hill, a Grammy-winning artist who worked closely with Prince over the past two years, told the Times, “Now he’s gone, and I realize I was leaning on him a lot. And that’s what’s scary. I’m on my own.”

Read her full interview in the New York Times. 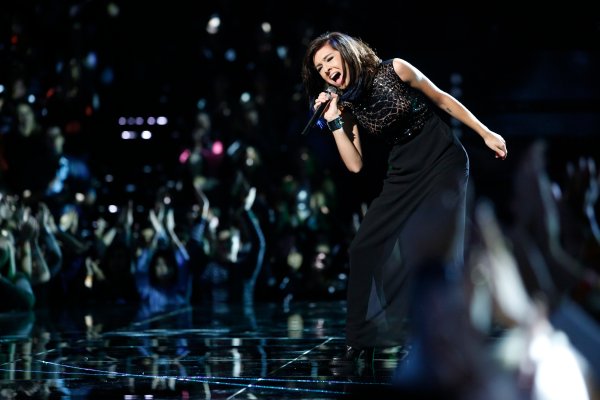 Watch Christina Grimmie's Audition for The Voice
Next Up: Editor's Pick